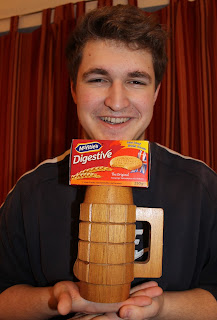 Daniel visited on Friday evening for help with English. After settling down he pulled two things out of his rucksack. The first was a present from Moldova. It was a traditional wooden mug.

I stared as he explained that nearly every family there had one somewhere in the house. He said you could drink anything out of it. I queried “anything?” He smiled and said not only water or beer, but fruit juice, and even vodka and whiskey! Here you can see him trying it out! He also gave me some McV biscuits. He saw them in a promotion at a local supermarket. Thanks Daniel. 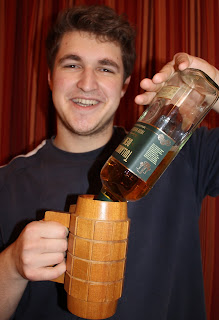 He sometimes amazes me how he switches languages without any problem. He has to give a presentation in German about the first partition of Poland. He looked into my books about Polish history, then into Wiki to get a shorter version in Russian, Moldavian and then Romanian before flipping  back into English and German.

Thursday evening found me at a public meeting hosted by the SPD in a church hall. The topic was the danger to the local borough from the rise of the right-wing parties. Outside the NPD = Nazi Party and its supporters were demonstrating against our meeting, and against all non-Germans in general. The police cordoned them off and so our meeting took place as planned. Interesting discussion and the hall was full.

Pleased to report that my health is getting better and I am now sleeping much longer. I am still taking a range of medicine and have another doc appointment on Wednesday morning. I expect to get more medicine. I hope nothing else!