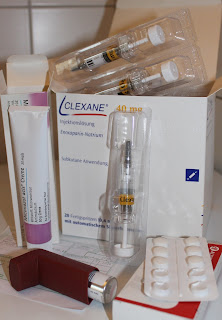 This month has not been a good one for me. I started the month with what later turned out to be acute bronchitis. I am still taking tablets for this. The last six are at the bottom of the photo. They are against ‘bacterial infection’. Last week, I finished my tablets which attacked slime in the lungs. Yuk!

Last week I noticed some veins on my right leg calf were swelling and painful. I also noticed a ‘fungal infection’ between toes 3 and 4 on my right foot. They became really painful on Monday so I went to my Docs on Tuesday.

He was not happy! I got a box of syringes full of medicine for my vein problem. I have to inject one into my stomach each midday. In addition, I got a tube of creme to attack the ‘fungus’ growing on my right foot/toes. I have to smear it on twice a day. Yuk, again!

If you remember, I was in hospital for a week in January 2015 with heart/vein problems. I wondered if I would have to go to hospital again but Herr Dok said,”Later, if this treatment does not work!” Don’t ask me where I got the fungus attack from. I’m still trying to work that out. Wishing you all a healthy end to January 🙂