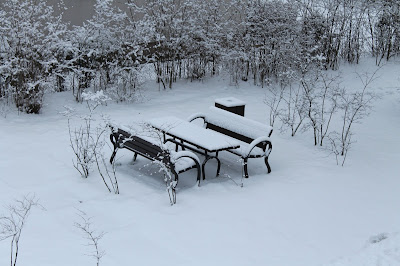 In a recent post I told my Silsdeners that winter had arrived in Berlin and showed a photo of the garden covered in snow. Since then we have had temperatures below freezing most days and even more snow. You can see this clearly from the photo of my picnic/grilling area. Seems difficult to image it in the sun!

I also recently posted a story about beards and included the only digital image I have of me with a beard. Remember that? I now have two. A certain nephew by the name of J2 sent an E-mail with a number of images. He admitted he got them some time ago from some Silsdeners. I had completely forgotten about them.

Here is one of me with a full beard! Crikey! I can’t believe I had such a face full of hair. I stared in disbelief when I opened it. It was clearly taken in Cambridge sometime in the first half of the 1980s. I worked this out from my appearance and that either I had just returned from a visit to India, or was about to leave for Delhi. Not sure which. Any of you UKers have a clearer idea?

This week I taught my Oldies again, took pills and wondering why my bronchitis was taking so long to disappear. I have a Drs appointment early tomorrow to give blood to be sent to a laboratory. I should be wiser about what is in it, apart from red wine from Spain, by the middle of next week.

I went to my Oldie Camera Club yesterday afternoon and tried again to understand their non-Berlin dialects as they quickly argued about the content of their winter shots. On Tuesday afternoon I relaxed with my SPD Oldies for afternoon tea/coffee and cakes. Tomorrow I am going to my Photoshop Gang and then I have a lazy weekend. Nothing to do but keep warm and read more books. Talk to you again next week.