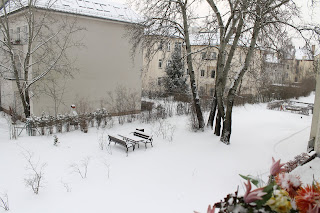 I’m fine and keeping warm. It’s only -8°C outside and still snowing. You can see this in the photos of my garden and building site. That’s about all I have to say about me and life in Berlin.

I could close now, but I want to share something with you. What do the words in the title, above, mean to you? The story begins last Sunday at noon.  Here is text copied from the BBC Radio 3 ‘blurb’.

“For New Year New Music, Michael Berkeley’s guest is the Irish composer Gerald Barry
His latest opera transforms The Importance of Being Earnest – with Lady Bracknell sung by a bass in a business suit, and Gwendolyn and Cecily throwing dinner plates at each other 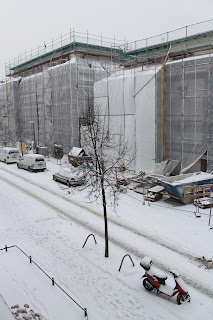 At the age of 14, he won a medal for composition – by taking a Mozart piano sonata and cutting it up, sticking it together again in random order. Barry went on to study with Stockhausen and Mauricio Kagel. He struggled to make a living as a church organist in Cologne: he was fired, first for being Catholic, then for being late for 7.30am Mass.
Gerald Barry’s marvellously idiosyncratic choices include Mozart, Alfred Deller, Clara Butt, William Byrd, a hymn setting by Stainer, and Oscar Wilde’s letter from Reading Gaol, De Profundis, set by the contemporary composer Rzewski. He ends with a hilarious recording of the Red Army Choir singing ‘It’s a Long Way to Tipperary’.”
When commenting about De Profundis set by Rzewski, Barry said it was like “the incarnation of ambiguity’. On hearing that I shouted at my radio, ‘WHAT?‘ Oh dear, the drivel that passes these days for the English language :-((( And not only the incorrect overuse of ‘like’ and ‘ absolutely’.
Let us take a minute to look at the problem. Check your dictionary and you will find the following.
Incarnation: A person who stands for some abstract idea/a person who embodies a God or diety in the flesh. Ambiguity: A word or sentence that is not clear about the intention or meaning.
Now try to put them together. As Germans would say.’Viel Spaß dabei’. I’m off to Jüterbog tomorrow to enjoy a few hours in a small town south west of Berlin. More about that later. Perhaps I can incarnate myself and save some money on the train fare!!