I think Winter has finally arrived here. It has been  -10°C in my garden all day. Some even say it will get colder and there will be snow. Pity Berlin doesn’t have any snow slopes, for then I would be cheering the arrival of snow, and getting my ski clothes out of the cellar. 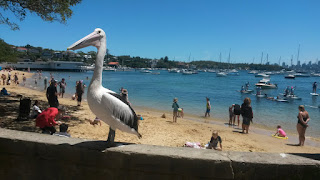 I’ve even had to wipe the bottom of my windows three times (Thrice in old English and in India!).  For those familiar with cold winters it means it is so cold outside that the moisture in the air in the room(s) turns into water and collects at the bottom of the cold window(s). Quick, put the heating on!

Silsden and the north of England seem to be drying out after the latest rain and floods. I wonder if the Brits will start to ask why they have been under water so often in the north and north-west. Perhaps some will connect it to global warming and why that is. Apparently it all begins with changes in the Pacific. What causes those changes?

My Ozzers don’t have the problem of mopping up the condensation from the windows. Just look at this photo. It was taken in a bay in Sydney, which as you know is in the south-east of Australia. This is on Christmas Day. Not bad.

I can’t work out what kind of bird is ‘hogging’ the front of the photo. It’s not a goose or duck. It has a big chin and long spindly legs. Is it a Pelican? When I look at it I wonder what it could be saying. Perhaps, ‘Eya mate, gotta fish fu’ mi?   For the non-Ozzers, keep warm and dry.