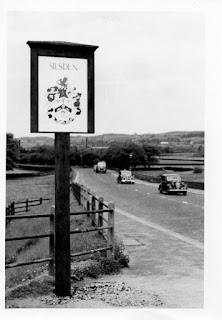 How strange is the weather at the moment? I looked at World Weather Reports over Christmas and saw there were storms, heavy rain, forest fires, floods, cyclones etc. in South America, The USA, Africa, parts of east Asia, China and houses burnt down on the south east Great Ocean Road in Australia.

There was also more flooding in north England. My ears pricked up when I heard of flooding in Leeds and York in addition to more towns and villages in the north of Yorkshire and Cumbria. The names of the villages and rivers I remembered from childhood. Day trips in summer to these places to play in the water and nearby fields where we had picnics. 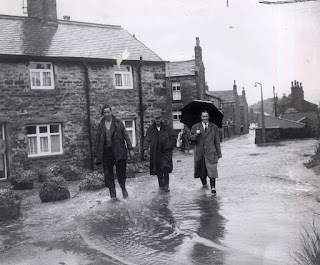 I turned on my computer and typed in Silsden. I discovered that there was no serious problem apart from high water in The Beck near to the post office before the water runs down to the River Aire which is one kilometre away. Silsden has known other high water threats, as you can see from an old photo, but it is higher than the Aire which can flood into a wide valley without reaching the town.

I shall watch weather reports in the near future. I have received no phone calls, or other forms of contact, from family and friends living in the area, so I take it that no news is good news! Meanwhile, I saw the new Star War film yesterday evening.

I met Marcel and we settled into a large cinema, with 3D glasses perched on our noses. It was in the Cine Star in the Sony Centre in Potsdamer Platz. They only show films in the original language. I think it was right to see the film in 3D, which supported the ‘Surround’ sound system. We both enjoyed the film and it was clear that it was the start of a new round of such films.