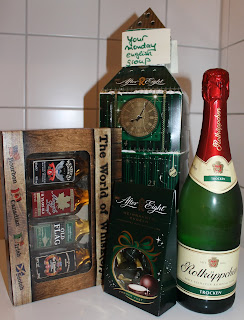 I had a very nice Monday and Tuesday. I went to the AWO on Monday afternoon for the last lesson with my Oldies. They had already prepared the tables with decorations, plates, cups, saucers and glasses!

They were in the mood to relax and enjoy the time with each other. Even so I did get them to do a couple of Christmas games, which they enjoyed. They had some presents for me. See the pic on the left

The main present was the selection of whisk(e)y from the USA, Canada, Ireland and Scotland. The bottle of sekt and After Eight mints were left over from the party, so they were pushed into my bag. I didn’t object! 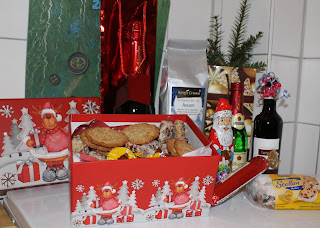 The other pic is of presents I got from my Tuesday Oldies. The pattern of events was very much like on Monday but they had nice coffee. My Monday Oldies drank hot, spicy ‘Glühwein’ ,which I don’t like. I just sipped a glass of sekt.

My present from the Tuesday Oldies was a bottle of sekt. As they cleared the tables at the end of the party a range of things were dropped into my bag. Again, I didn’t object!

From there I took the U-Bahn to another AWO building where my SPD Oldies were having a Christmas Party. We had a lot of guests including the local Mayor. Always nice to see her. Lots of talking, coffee and cakes interlaced with speeches as different guests said how pleased they were to have been invited!

We all got a bag of seasonal cakes and chocolates plus a small bottle of ……. guess what! Yes, sekt. I really enjoyed the atmosphere and was one of the last to leave.