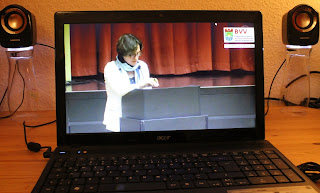 After lunch with the Foto Oldies last Wednesday, I relaxed at home, didn’t update my blog :-(( and packed my papers for a meeting. It was time for my local SPD committee meeting. Yes, I was elected to the committee in 2014. We allow one hour to discuss matters before the doors are opened for a general members meeting.

We followed the usual format last Wednesday evening with time to nibble on Christmas cakes, chocolates and sip a hot spicy wine only drunk at this time of the year. The meetings covered many topics and ended later than I wished. Even so, there are elections within the party next year so we had to cover a wide range of topics.

On Thursday I was lazy again. I didn’t update my blog :-((  In the evening I opened my computer to watch the BVV Lichtenberg meeting live broadcast. The Silsdeners are most likely saying, ‘What is a BVV?’ and rightly so. Standby for this example of a BIG German noun. 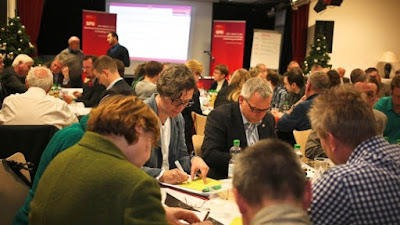 It means: die Bezirksverordnetenversammlung. Phew, but is that a mouthful and it is not alone. The language is full of such things. They are sometimes called Compound Nouns and can be formed from 3,4,5 or more nouns! Even German comedians make fun of this aspect of the language.

So I watched the BVV live via the internet. Here is a pic of our Mayor addressing the meeting. Guess what? She is from the SPD :-))  My local party has a webpage and posts reports and photos about meetings. I went to that webpage during a break in the live broadcast. Guess what I found?

Yes, this photo. It was taken a week earlier when the SPD Lichtenberg had a special ‘Future Policy’ meeting which I attended. There were nearly 100 members present who formed 6 groups to discuss what policy the SPD should follow locally from 2016 to 2025.

I was in the migration and integration group. Now look at the photograph and FIND ME! You can post your comment/opinion direct to this blog, or call me/send an E-mail. I do not have an account in what is called ‘Social Networks’. I don’t grunt or twitter for I am not an animal or bird!