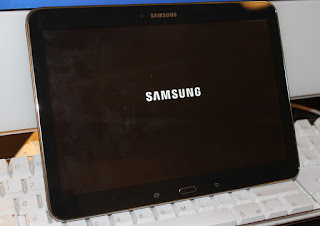 My iMac got a grandson yesterday. Yes, strange but true. Just look at the photo and you can see the baby happily sleeping against Grandpa – Ach wie schön! The background to this story is not so nice. Get a glass of whiskey and settle down to get annoyed!

The story begins last mid-July. An elderly gentleman called ‘Oldie H’ had a mental breakdown. I have mentioned him a few times on this blog so regular readers will know about him. He had earlier suffered heart problems and had a number of operations.. This time he said his neighbours were all Nazis and wanted to kill him to get his flat. 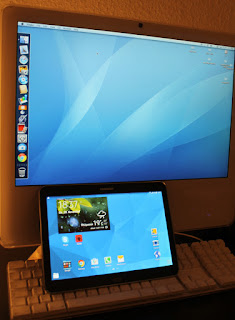 Before this revelation, he went into a branch of a large chain of electrical stores near his then home. For some unknown reason he bought this Samsung tablet and a large modern ‘smart phone’ including contract to use the things online.

He has a laptop and apart from writing a few e-mails doesn’t know how to use it. He also has a WLAN router but even after two installations from ‘specialists’ it doesn’t work. He has more than one mobile phone but only uses them to call people. In short, he has no idea how to use his new Samsung tablet or his large new smart phone and he does not have the system at home to support them.

I recently visited him in his new flat and discovered this story. My first reaction was to take both pieces of equipment back to the store, find the salesman and then stuff both down his throat. The Samsung first and then the smart phone as dessert!!! He asked me to take the Samsung home and get it working. I  did this as you can see.

The Samsung also has a chip so it can be used as a phone. He bought this later and installed it but never used it. When I tried to activate it the thing asked me for a PUK. I talked to Oldie H this morning and brought him up-to-date. I told him he had to find the PUK and get his WLAN working. Let’s see what happens.

Meanwhile, I wonder what someone would do with this salesman in a Tarrentino film. I think it would be worse than forcing both down his throat!! What do you think?