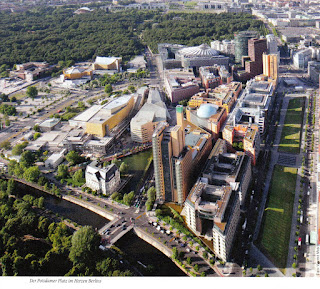 It snowed a lot earlier. I ventured out to buy food and things for the weekend from my local supermarker, then retreated to the warmth of my palace! Jan and Arancha are in town. They have a busy schedule and I shall probably see them on Monday before they depart.

Looking forward to that and catching up on news. Meanwhile, I recently opened a magazine and read a report about Potsdamer Platz. I then realised I had never posted information about it on my blog. It is now a major tourist attraction and a place I enjoy visiting. 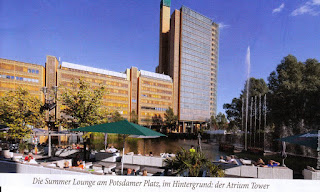 As you probably know, it houses three cinema complexes with a total of 30 screens in and around the Sony Centre. One only shows films in the original language so that is where I go to watch films such as the latest James Bond film called Spectre. I found a brief history of the area. Here it is:—- 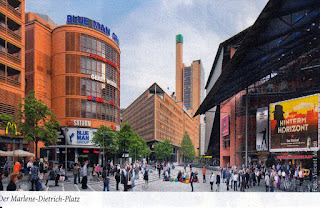 Potsdamer Platz  is an important public square and traffic intersection in the centre of Berlin, Germany, lying about 1 km (1,100 yd) south of the Brandenburg Gate and the Reichstag (German Parliament Building), and close to the southeast corner of the Tiergarten park. It is named after the city of Potsdam, some 25 km (16 mi) to the south west, and marks the point where the old road from Potsdam passed through the city wall of Berlin at the Potsdam Gate.
After developing within the space of little over a century from an intersection of rural thoroughfares into the most bustling traffic intersection in Europe,  it was totally laid waste during World War II and then left desolate during the Cold War era when the Berlin Wall bisected its former location. Since German reunification, Potsdamer Platz has been the site of major redevelopment projects.
It really is worth taking time to explore the area when you are next in Berlin. Near to my favourite cinema complex is the Philharmonie Centre where you can hear the world famous orchestra in its local hall famous for its clarity of sound.  Treat yourself to a concert, and there are lots of restaurants and bars to relax in before or after your concert — or film!