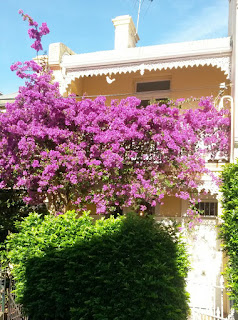 I saw the new James Bond film called Spectre yesterday. I met Marcel and Kyrill outside the Sony Centre Kino where they only show films in the original language. Both wanted to see it in English, which is a compliment to their language skills.

I was surprised at how good the film was and that it developed themes/plots seen in the last Bond film. It starts with Bond being nice to a lady 🙂 before he goes off to kill some ‘baddies’, in the course of which things get explosive! I can really recommend that you find a cinema showing this film, settle into your seat, and just enjoy the fantasy world of Mr Bond. 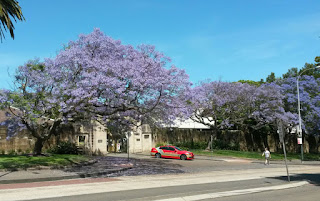 I have no appointments today – hurrah! I slept a little later before starting the day by reading a few chapters  in my German book and noting new words, which were in a kind of Platt-Deutsch/Low-German spoken earlier in East Prussia. Then a bit of tidying up and checking e-mails.

I got some nice images from Ian and Birgit in Sydney. Here they are. You can see that Spring is ‘Sprungening’ in and around Sydney. They recently moved to a new house a long stones throw from their old one.

One photo is of the flowers in front of a neighbour’s house and the other is of the entrance to The Barracks. I spent a few hours there on a conducted tour when I was in Sydney earlier this year. It was late summer then so not as colourful as now. Happy memories!

Now to wash-up and see what is for lunch apart from dry bread.