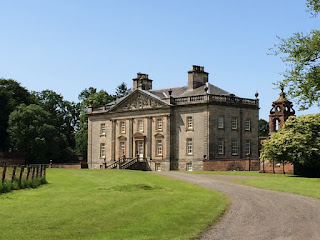 I have just talked to Ian in Sydney via Skype and so had the chance to get more information about the place he rented in summer. A few of my German readers asked for details. Perhaps they want to ‘rent-a-pad’ for next summer! 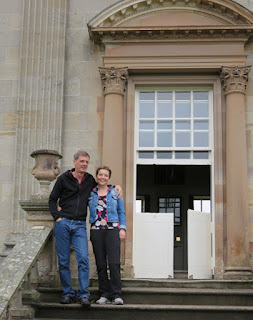 Both remained in the family until 1504 when the only surviving daughter marred a gent called Thomas Boswell. He got the property and became the Laird of Auchinleck. This family is famous for a friendship with Dr. Johnson, as you surely know. The house you can see here was built in 1760, probably from the stones of the old castle.

Many such families had problems to maintain such properties and this was the case with the Boswell family. In 1986 the property was taken over by the Scottish Historic Buildings Trust and in 1999 it was bought by The Landmark Trust. You can find a lot of information about this Trust on their website. The function of the Trust is to preserve old buildings and let them for holidays.

Nice idea and long may they do it. Ian and Birgit found the house on the Trust’s website and rented it for 10 days last summer. They invited friends with their children and enjoyed time together. You can rent this too. It sleeps 13 people, has a large kitchen and dining room for communal eating and is cheaper per day than a hotel.

Here is a photo of the hosts at the entrance to the mansion. I plan to visit England next summer so now I am thinking about having a large family gathering in such a place. Must look on the Trust website to find a suitable ‘rent-a-pad’ not too far away from a plentiful supply of Fish ‘n Chips and Pork Pies :-))