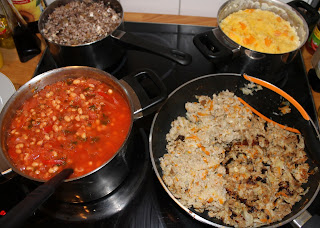 I left Frohnau yesterday afternoon and headed for Spandau. From the far north of Berlin I took two S-Bahns and an U-Bahn to get to my destination. It all took another hour. Spandau is in the far north-east of the city. I have been there a number of times before and posted reports on this blog. 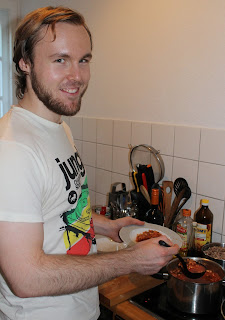 The reason this time was an invitation from Kyrill. He is Marcel’s flatmate and they study the same subjects at the same university. I posted a photo and brief story about him when Marcel moved in and I visited for the first time.

This time it was to enjoy typical Russian cooking. I know that in my last post I said I was in a restaurant after my Frohnau walk, but I knew I had a meal waiting in Spandau so I only ordered a small appetizer. A good decision.

I picked up some red wine on arrival in Spandau and that was the right choice for the food. Kyrill had really put a lot of effort into preparing and cooking the meal. He also likes to cook and does so when he is at home in Russia. He told me about the dishes, but I can’t remember except one was Ukrainian borscht. Very tasty food and as usual with conversation laced with lots of jokes and humour. Thanks Kyrill for a very special experience.

Footnote to my Berlin readers: They are looking for a new flat/rooms to move into by the end of the year at the latest. It is not easy to find a place in Berlin now as you know. If you know of a place please contact me. Thanks.