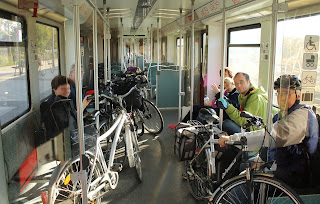 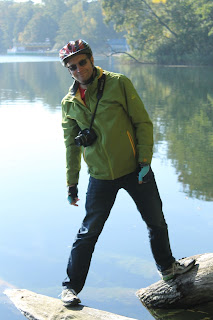 The 3rd October is a special day in Germany. It is an official holiday to mark the (re)unification of West and East Germany. This year was the 25th anniversary, so a special day for all. The weather was ideal with sun and blue skies. 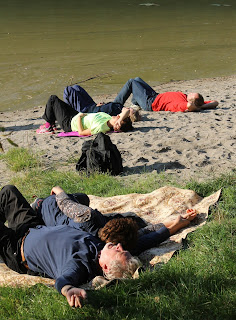 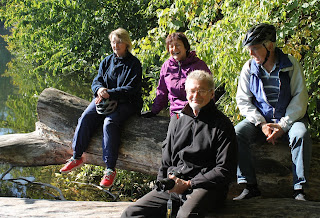 My Mugglesee Gang and I decided to spend the day on a healthy bicycle ride plus picnic. Uli had the task of organising the event which he did very well. I noted that as we were moving, he looked at his smart phone. Yes, all the information was there on the internet. Only a few years ago we used maps printed on paper!

We met in the bicycle compartment of a S-Bahn going to Strausburg. It is to the east of Berlin and if you miss it and keep going you arrive at the Polish border. As regular readers will know, it is one of my favourite places in the countryside east of the city.

We exchanged information about what we had done since out last meeting before we got out. Uli took the lead and led us towards a nearby lake. We got there okay but ended up on the walkers track near the water rather than the higher bicycle track. No matter, we stopped for a break  at the water side. See the photos.

We continued cycling, had our picnic and ended up at a lake north of Strausburg, which I had not been to before. There we had another rest and enjoyed the sun, as you can see in the photo. Back on the bicycles and a steady pace to the S-Bahn station.

We reflected on the day as we returned to Berlin and all agreed it was one to remember. Great sights, weather, picnic and friendship. Looking forward to my next Muggelsee Gang meeting.