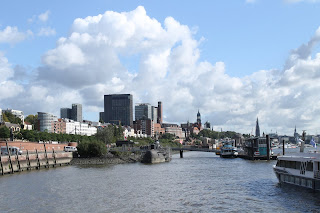 Yes, the USA hamburger did originate in Hamburg, but was not originally eaten in a ‘bun’. Just one of many interesting facts I uncovered when reading about the history of Hamburg as preparation for my visit with Daniel yesterday. 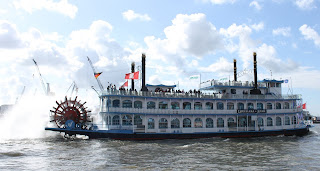 Its official title is the Free and Hanseatic City of Hamburg. This reflects its long history as a mainly independent city state. The first recorded history of the place is in an order from the Emperor Charlemagne in AD808 that a fortress be built to defend against Slavic incursion. It was called Hammaburg: Burg means a castle or fort. 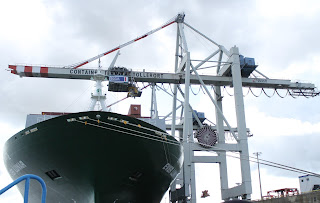 In AD834 it became the seat of a Bishopric which later merged with one in Bremen. In AD1189, Hamburg was granted the status of an imperial Free City by the then Holy Roman Emperor. After that, it began to expand as a major port. It is on the southern part of the Jutland Peninsula and so has the North Sea to the West and the Baltic Sea to the North-East.

During the Middle Ages, it became the centre of a banking system linked to trade and shipping. Before the creation of Germany in 1871, it was a fully independent republic state. In the second half of the 19th century Hamburg expanded due to Atlantic trade and shipping millions of German speakers from other areas to the USA. This made it Europe’s second largest port after Rotterdam. 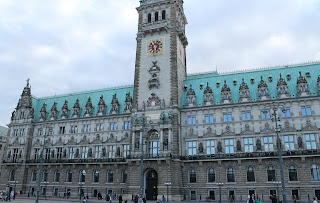 Although incorporated into the new German state, the Weimar Republic and what followed, Hamburg has managed to maintain a level of independence and played an important part in the founding of workers movements including trade unions and the SPD.  Currently the state government is led by a SPD/Green Party coalition led by Olaf Scholz. He was a minister in the national SPD/Green coalition after the year 2000.

It is situated on the River Elbe, 68 miles/110klm from the North Sea coast but is considered to be a sea port because of its ability to handle large ocean-going vessels. In Europe it still is 2nd to Rotterdam but 9th worldwide in the volume of goods handled. It is also the most important banking city of Northern Europe.

The Rathaus/Town Hall can be seen as a statement about city pride. It is a richly decorated Neo-Renaissance building completed in 1897. The tower is 112 metres (367feet) high and the facade is 111metres (364feet) long. Go and stare at it when you visit Hamburg. It is worth a visit!