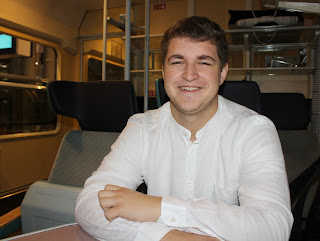 I went to Hamburg with Daniel yesterday. Can I hear anyone asking why? His father could not go so he asked me to deputize. I readily agreed. We met at Berlin Hauptbahnhof at 6.45am, went to the underground tracks and jumped into our train which left at 6.59am. The journey took three hours. 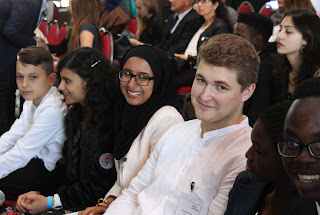 It was Daniel’s first train journey in Germany and he was looking forward to the experience. We went to Hamburg to attend a  meeting of students who had received scholarships from the joint Joachim Herz and Robert Bosch Foundations. It is the 5th year of the project.

The scholarships are given to students from non-German backgrounds and/or on low incomes. Daniel had succeeded in his application to go to college starting at the beginning of September. The scholarship includes financial support for living expenses and pay college fees. It also covers payment for a laptop computer! He is looking forward to buying one. 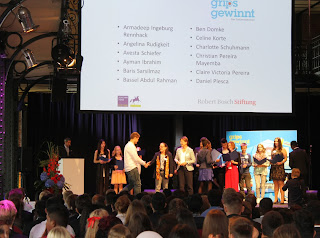 We found our way to the ‘Fischermarkt’ on the waterfront, where the ceremony was to take place, and registered. Daniel joined other students to prepare for the event and I joined parents for a guided boat tour of Hamburg harbour. That was really interesting. 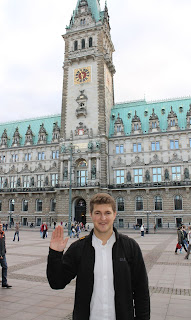 In the afternoon the ceremony started by welcome speeches from representatives of both Foundations before the main event. This was when each of the 110 students were called onto the stage to receive their scholarship award. Their names were displayed on a large screen and here you can see Daniel getting his documents.

After, we all relaxed over a buffet. We got talking to a student from Pakistan who lives in the next district to me! What a small world.  After more talking and eating, students and parents began the long journey to their respective homes. They had come from many areas of north Germany. Daniel and I went by bus and stopped off at the Rathaus/Town Hall to take a few shots.

At the main station we found confused passengers for a computer system controlling part of the area had broken down. Some trains were cancelled so we were very relieved when our train was announced. We left 5 minutes late and arrived in Berlin at 10.20pm. A very enjoyable and memorable day which I am happy to have shared with Daniel!