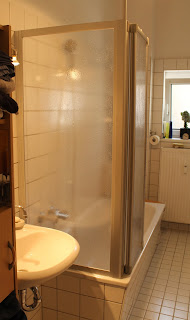 I had a new shower cubicle ‘thingy’ fitted two hours ago. The Silsdeners are asking “Why?” I have had a shower curtain hanging over/into the bath since I moved into this flat. It was supported by a number of metal rods which fed back to a central plastic piece which was screwed into the wall.

Is it all clear so far? The old system is okay but the weak point is the central plastic piece for the screws tend to stop supporting it and fall out. When this happens the metal rods fall into the bath along with the nice curtain you took some trouble to buy from Aldi or Lidl when they had a special offer! 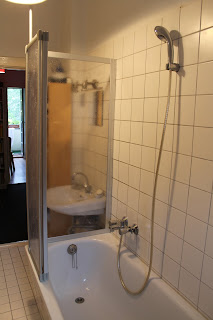 I decided it was time to improve my system. It talked to a Hausmeister (Caretaker) and he found information on his mobile phone. I later went to a local company selling different kinds of showers and ordered one. Twelve days later I got a call to say it was ready to be delivered. It arrived on plan last Tuesday.

I called the Hausmeister and it was agreed he would come with an assistant this afternoon to install the thing. The two arrived at just after 2.00pm and introduced me to a new and younger Hausmeister. They asked if he could work with them as part of his training. I readily agreed and settled down to watch the installation.

All went smoothly and I noted how the Hausmeisters made jokes in perfect ‘Berlinisch’! So, I learnt to listen and understand more about this local variation of German. The photos show my new facility but not with all three doors open. Some kind of ‘glue’ was used so I can only expand it tomorrow when I take my morning shower. Looking forward to that.