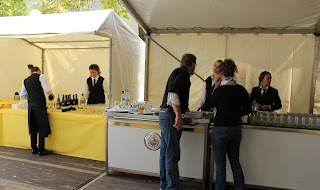 Last Friday I went to Kerstin’s Oldie Keep Fit Class. There were four of us plus Kerstin. Four women and me. It was really great. Very quiet and a relaxed atmosphere. I could have stayed there for longer, but I had another date. 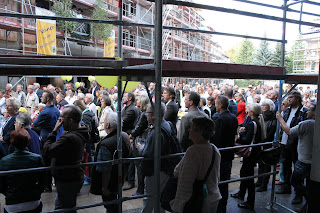 On returning home I went across the street to the party to celebrate the ‘topping off’ of the buildings. It was very well orgnanised and there were lots of members of the housing association there. We started by assembling in the central triangular area.

Of course most people had picked up a glass of something as the entered the complex. With something to drink we settled down to the speeches from the housing association board members and guests. 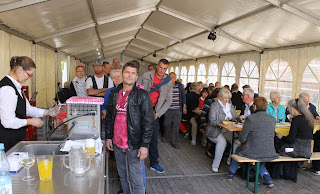 One important guest was the ex-Mayor of Lichtenberg. You can always see him on the left of my blog when he gave me my German citizen document. He is now the Senator for City Development which means building, renewal, repair and how Berlin will look like in the future. 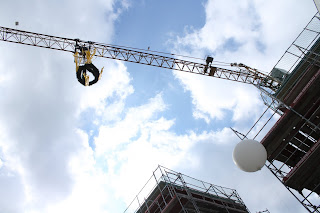 He gave a speech about the contribution out building project would make to this part of the city. Other guests continued the theme in different ways. As they were talking I looked around and spotted Marita. I knew she planned to come to the ceremony but did not know exactly when.

She has registered for one of the flats but not had confirmation that she will get one. The list of applicants was stopped at 500. There are only 78 flats being built.  I hope she gets one. It was nice to see her and catch up on news. We had time to have a meal and a few drinks before she had to leave for another appointment.

I had one too. It was to walk over the road into my flat and welcome Prof. Dr. Sir Peter. He wanted to have all my photos taken in Lisbon. That done, we had time to chat about his future plans and completion of his doctorate. Nice to see him again at the end of a very interesting day!