I went to a concert today. It was at the Konzerthaus Berlin which is in Gendarmenmarkt. This area is also home to the German and French cathedrals, which are all on the Tourist Map of Berlin. The concert was organised by five regional co-operatives. 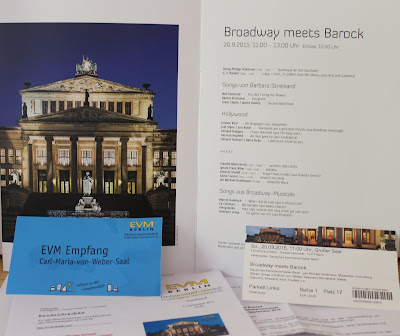 One of these is EVM. This is my housing association and building the flats opposite my flat. The co-operatives decided to host a concert for members and my EVM contacted me to say I could have a free ticket to the concert and to a buffet after. This was to say sorry for having to put up with building outside our homes.

I accepted this offer immediately for I have been living with noise, dust and inconvenience for a year, as have many others! I jumped out of bed this morning and got ready for the concert. I walked to Holger and Gabi’s hotel to have a cup of tea with them and say goodbye.

I then went on the public transport system and arrived at the concert hall in time to settle into my seat in the first row in the middle. Nice placing! The theme was “Broadway meets Barock”. A really interesting mix and concept.  The performances were excellent and all led by the moderator Jan Michael Horstmann. A very talented musician and moderator with lots of humour.

I enjoyed the buffet after and got into conversation with a couple. They were both from Turkish parents who came to Germany in the 1960s. They went to school here, got jobs, worked and founded a family and are now pensioners.

We talked about the new refugees and how they could help. I gave them some tips, names and telephone numbers for which they were grateful. I returned home reflecting on a very full and interesting few days. More to follow as this week unfolds.