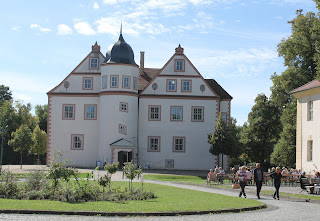 I have just got back from a day trip/excursion to Königs Wusterhausen. I’ve been there before and posted stories and photos on my blog about the town and my trips. In case you Silsdeners have forgotten it is a pleasant old town south of Berlin in the Bundesland called Brandenburg.

The main attraction is Schloss Königs Wusterhausen. It started life as a small castle surrounded by a number of farms and houses. A modest beginning. The medieval castle was later transformed into a Schloss, which in this case best translates as a country manor house. It hardly passes as a palace which is sometimes the translation of Schloss. 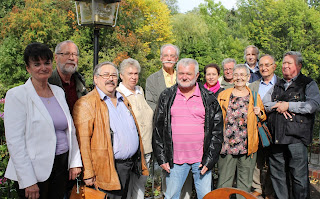 When the later ‘Soldier King’ Frederick William I was ten, his father gave him the Schloss as a birthday present. Not bad! I wonder why my father didn’t do the same when I was ten. I think I got some new grey short trousers for school.

King Freddie-Willy seems to have liked the place for he spent each autumn hunting there. I don’t think the deer, rabbits, wild pigs were too happy about this. When he got older he founded a Tobacco Club which met in a large room at the top of the Schloss each evening. Can you imagine the smell for there is only a small window. Phew!

I went there today with my SPD Oldies organised by Gabi who is the ‘Bossin’. We had a short business meeting to nominate members to stand for various positions before setting off. We had good weather for our visit. It ended with a long lazy lunch in a restaurant on a river behind the Schloss. You must go there the next time you are in Berlin.