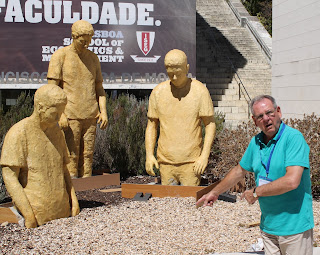 The day after registration for the conference, there was a big ‘get together’ party on the campus. On my first visit I found a few men looking at the ground.

I asked what was wrong and was told that one of them had lost his keys. I looked at the ground and pointed to where they were. Here is a photo of that moment. They were very grateful:-)

The ‘get-together’ party was held in the garden area of the campus. A very nice setting. I wandered into the area and stopped in surprise. 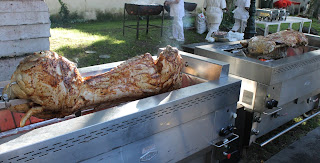 In front of me was a cook grilling two pigs! Yes, two. Look at this photo. Poor Pinky and Porky – they were now being gently roasted in front of my eyes. Other cooks were preparing green salads and a few had started to grill large amounts of sausages. I wondered if I were back in Berlin. 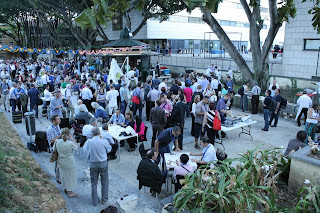 I managed to secure one of the last tables for us while Peter brought some much needed cold beers. It had been a hot day. During my time in Lisbon the temperature was between 34 and 39°C. Sipping a cold beer as the evening cooled was a perfect combination. Here is a photo of guests at that party. 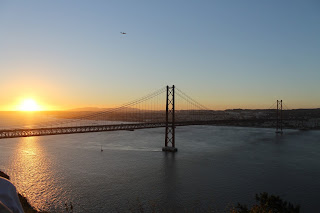 At the end of the party I noted that Pinky and Perky were no more. All that remained were a few bones. The healthier green salad had also disappeared. We returned to the hotel with full stomachs and enjoyed a G & T nightcap before turning in for the night.

We continued to visit more tourist places until it was time for Peter to present his paper to fellow academics. He gave a very good presentation and in clear good English. One of the best presenters I would say.

On Friday, we all gathered at the campus and took a fleet of buses across the bridge and ended up at a restaurant area under a set of linked tents.

This was the Friday evening end of conference party. We sipped beer/wine in the garden as the sun slipped beyond the horizon. Here is a photo.

It created a very calm and restful feeling in the garden.Very good food, wine and service marked the end of conference party. We enjoyed all including meeting and talking to other delegates at the party.

We took a late bus over the bridge back to the campus and then public transport back to the hotel. Next day was our last and we decided to go to Belem. More about this in the next post.