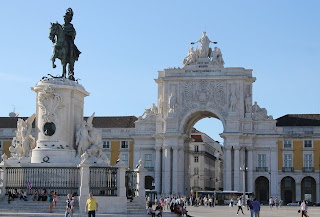 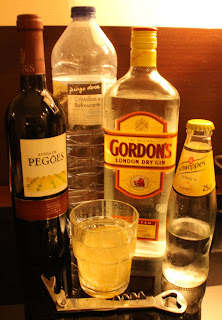 I hope to show my Silsdeners a view of Lisbon in this and other posts. If you get the chance to go there just do it. I noticed more German and Spanish speaking tourists than those with a Brit accent. Perhaps the Brits were on the coast/beaches/sipping Port wine on the Algarve!

After breakfast we always talked about where to go and what to do. We managed to cover most of the major tourist sights in addition to conference duty. Our hotel was in the centre of the city with only a 10 minute walk to the water. 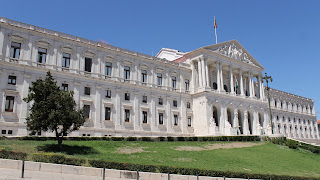 We discovered a supermarket where I could buy lemons and Schweppes tonic water. Big smiles! Guess what I bought at the Duty Free shop? Well, I also bought water and red wine at the supermarket – as you can see. Notice my trusty knife/corkscrew. An essential and well traveled tool. 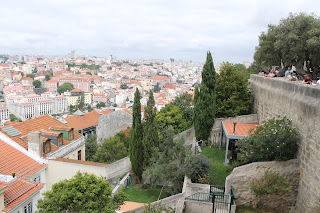 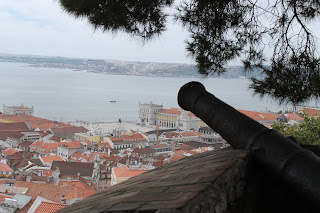 We covered many of the central tourist sights in the first few days guided by Peter who has an almost uncanny knack of direction. There is a large square on the waterfront with a white marble gate and statue in front of it. We later had a meal at a restaurant there. We got to know the local tram system. The small ones which go up the hills and through the narrow streets look to have been built in the 1920s. They are a big tourist attraction.

We found the campus where the conference was to take place and discovered it was next to a very large white marble building. It is called the Portuguese Parliament building. Yes, this is where the MPs sit and discuss national matters. Not a bad neighbour to have. 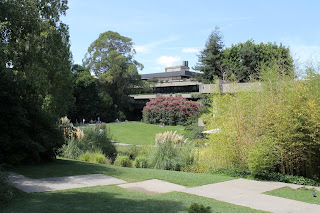 We went to the old castle on the hill dominating the city. It is called Castelo de S. Jorge. It was founded in the 11th century by the Moors. In the 12th century it became the seat of Portugal’s first Christian kings and government. Now it is a tourist ruin but one which offers great views over the city.

Later we went to the Calouste Gulbenkian Museum Park. It is a very large green area with many different sized/shaped buildings to house all the 6,000 works of art he collected and left to be displayed to the public. It is an absolute must to visit.

If you want to see all of the works then I suggest you spend a week in the different buildings. Just pick your topic and see the collection. After a few hours your brain may rebel at so many wonderful things to take in, so allow time.