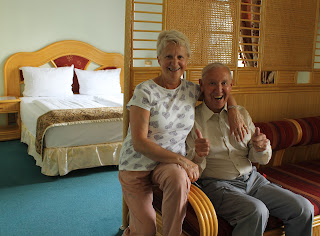 I met Alan when I was 16 and went to a college in Leeds. He is my oldest friend. He later met Lynne, married, had a family and opened their doors to many orphaned and disabled children. If they could they would adopt all needy children in the world. Their hearts are bigger than Mount Everest.

I can assure you I am not exaggerating. Jan and Andrea are just two of many people they have welcomed into their home/lives. They have a really nice house in Castleford, hence the title of this post. Alan and Lynne arrived in Berlin to attend a wedding. I had organised a hotel on the main road/tram way, near to the S-Bahn and not too far from my flat. 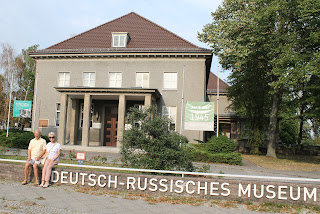 They really liked the hotel room, more like a suite actually, as you can see from this photo. It was not their first time in Berlin and they also like visiting the city. I met them at the airport, took them to the hotel, round the corner for a light lunch of soup, then into town to see some of the tourist sights. 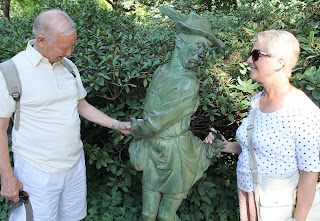 We ended the day in my flat for a meal and so Alan could e-mail his sons in Ozland and NZ. He was also able to watch a cricket match via my computer. That was the main attraction!! Next day we went east into the countryside around Strausberg and ended the day at Johanna’s large comfy flat.

There Johanna played hostess to us and to Jutta and Gerald. A really happy evening with lots of talk covering many topics. Gerald loves to meet people and speak English so he was very happy.  Next day was Friday so we set off for the Rotes Rathaus = Berlin Town Hall. We arrived at 1:30pm in time for the start of the civil ceremony at 2:0pm.

There I was able to meet people from Hungary I had not seen in years. After the ceremony, we all went to a restaurant for refreshments and later a meal. Next day I spent with Alan and Lynne and started to pack my bag for the flight to Lisbon. 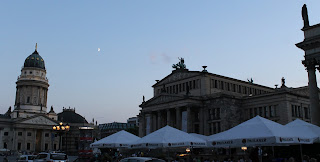 On this day we went to the waterfront at Köpenick to a ‘Beer-and-Wine-Fest’. Alan and Lynne got to know a man looking rather green with hens sticking out of his clothes. Yes, a statue of a hen thief from the middle ages. I like this shot of all three!

That evening, we went to Gendarmemarkt. This is an area containing the German and French Cathedrals and the Berlin Concert Hall and all near to Friedrichstrasse. It is bang in the middle of a major tourist area. It was a hot evening so we sat outside for a meal with Nick, Julie, Laura and Matthew.

You can see that we enjoyed being together. Then it was time to say goodbye to the family. They were flying back to England next day and I was off to a wedding ceremony with Alan and Lynne.