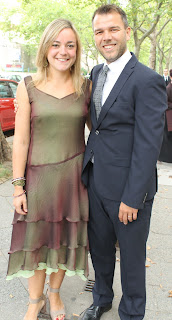 As I wrote in my past post, I went to a wedding with Alan and Lynne. The civil ceremony was on Friday 21st August. The wedding service in a church took place on Sunday 23rd August. I sat with Johanna upstairs near the organ so I had a ‘bird’s eye’ view.

It was an interesting experience. After the ceremony, we all went into the garden behind the church for drinks and snacks. There I was able to meet again Uncle Willy and his family after so many years. 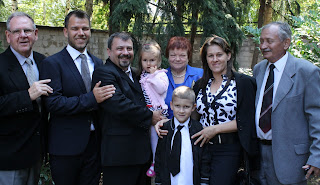 He, wife Ilonka, son Willy II, his wife and children had driven all the way from the north of Hungary to attend the wedding. Vera and her friend had also driven from Budapest to join in. She speaks English and German very well so we quickly caught up on news. I spoke German to Willy II who translated into Hungarian for his family. 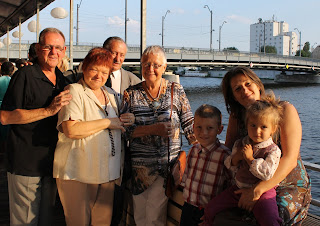 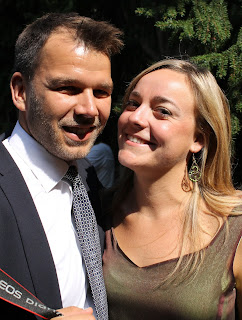 Jan and Arancha had flown in from The Netherlands. It was great to see them after their honeymoon. They looked so well and healthy, as you can judge for yourself in these photos. For Jan, Uncle Willy and family are part of his extended family, like Alan and Lynne and ‘lads’. Jan stayed with the Willy family in Hungary many times when he was a boy and teenager. Speaking Hungarian also helps 🙂

There was a wedding reception in my part of the city in a restaurant overlooking the River Spree. A very pleasant atmosphere, good company, good food, good wine made the evening special.

From there I went back to my flat later than planned. I decided to finish packing when I woke up at 3.00am for a taxi had been booked for 4.00am. That was a mistake as you can read in my next post.