I have just returned from a farewell party for Colin. As I write he is packing his bag before traveling to Tegel Airport in the north of Berlin to take a flight which will eventually take him back to Sydney, which you know is in Australia. 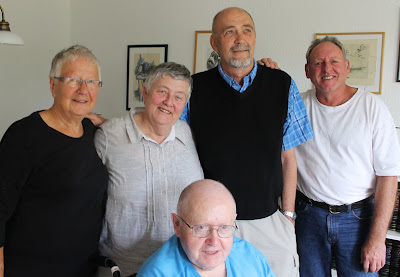 He plans to return to Berlin in late summer next year. Meanwhile, he is going to start a German course when he returns home. He already speaks basic German and I noted how much it had improved during his time here. His cousin is Johanna and she gave the farewell party.

Gerald and Jutta were there, as was Gerd who is returning to Australia in a couple of weeks. I joined this very ‘happy gang’ late for I had been ‘on duty’ for the SPD.  This was to stand outside a primary school with another member to hand out plastic lunch boxes to kids who will start school next Monday.

Today the schools hosted a special party for the whole family. All came in their best clothes and it was wonderful to see so many children happy to get an unexpected present from us. What a nice day even though the weather was changing into autumn.