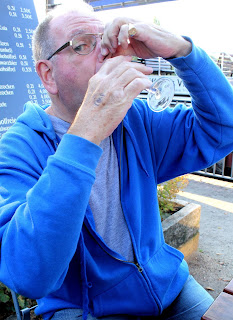 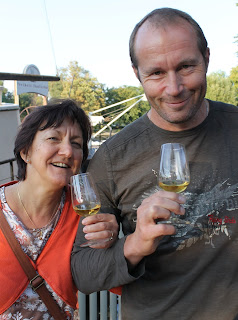 I ended Friday at the Köpenicker Whiskyfest. This is held each year. Köpenick is a district to the south and east of where I live. The rivers Spree and Dharma flow through the district and it is very green.

I met Falk and Elvira who are members of The Muggelsee Gang. The rest of The Gang could not make it so we decided to sample the whisky on their behalf :-))  Well, we felt it was a duty!

On meeting they showed me a photo of a baby clearly having a good sleep. I then heard it was their first grandchild and a boy. Of course, we had to have another glass of a very special whisky to ‘wet his head’ !! The baby had emerged into the world earlier in the day. Wow!

It was very pleasant to sit on the banks of the River Spree and catch up on news as we sipped a couple of special whiskys. Lots of people sitting around us and all enjoying being with family and friends. What we all had in common was what was in the glass!

I started the day with Kerstin’s Keep Fit Gang for Seniors and it was nice to see them after a couple of weeks break. I discovered I had missed the summer party because I was in Lisbon. They reassured me that I had been missed, particularly when they played a game of French bowls. Another nice day. Hope yours was.