When I was a child in England there was the death penalty for serious crimes such as murder. In the tolerant 1960s it was removed as England struggled to become known as a ‘civilized’ country. There has been an uneasy truce within the population ever since. 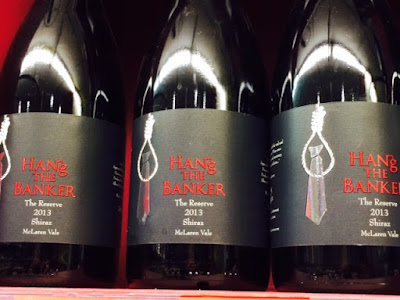 Let us move to 2008/9 and the financial/banking crash/crisis. It hit me hard as I reached retirement age and saw part of my hard earned investment in a private retirement scheme start to disappear. I moved what remained and managed to save part of my investments. Others were not so lucky.

And then I began to hear people asking why bankers were not in prison. Such questions and debates spread. People still ask the same question. No answer so far. I am thinking of contacting a number of international political and economic agencies to volunteer as a hangman!

Meanwhile, an enterprising company producing wine in Australia has come up with a half-way solution. They have produced a Shiraz wine called ‘Hang the Banker’, The Reserve 2013. I have just got this information from Ian and Birgit in Ozland for which I am grateful.

I must buy some bottles and drink from them as I carry out my new job. No more Mr. Nice Guy when it comes to bankers!! Pass the glass.