Yesterday I met my Kerstin Oldies as usual for a bit of movement and ‘keep-fitting’. I think I have created another stupid English word! As I left, the trainer asked me what I had planned for the day. I answered that I was going to meet some refugees.

That afternoon I cycled to a large complex on the outskirts of the district in which I live. I met the No.1 and No.2 of the district SPD en route. Shortly after we arrived at the entrance to a complex of buildings erected in the DDR.  A private investment company now owns it and plans to build flats/houses there. Not now, for they have just signed a contract with the local council to allow it to be used to house refugees for a couple of years. 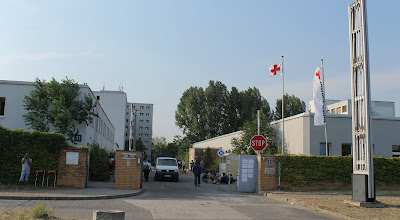 It all happened quickly. As you probably know, Germany takes a lot of refugees from the wars in Syria and Iraq and the numbers are growing. The UK does not. For example, Berlin alone took in 4,150 refugees in July 2015 which was more than in the whole of 2011. They need to live somewhere so the decision was taken to use this building.

Last weekend, 1,000 refugees were moved into the complex now run by the German Red Cross. Lots of organisation problems such as sleeping arrangements, toilets and showers but extra specialists were drafted in and are improving the facilities.

Local people were asked to donate anything, so they duly arrived with big bags full of clothes, toys, washing/shower liquids and other essential things. I helped to sort the gifts out into piles yesterday and also got into discussion with one of the ‘Bosses’.

He found my idea to set up a Senior Refugee Group very interesting and wondered why they had not thought about that. I am going to a meeting of my SPD Seniors on Tuesday afternoon to appeal for help. Lets see what happens.

Meanwhile I take off my hat to all for organising such a rapid response and my local Karlshorsters for finding all the things to donate to the refugee individuals and familes. Well done!