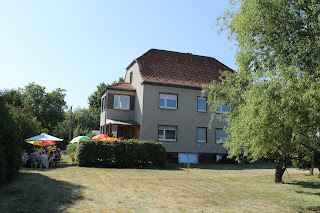 Where did you go yesterday? I went to two garden parties. The first was at the home of a friend of Johanna, who is a music teacher and performer. I saw him in an open-air concert at Schloss Biesdorf a couple of years ago. Again, he was a accompanied by his talented daughter.

I cycled to Johanna’s flat to meet the Australian Gang. This time increased by the arrival of Greg. We went to the local S-Bahn. One stop later, and a short walk, we arrived at our host’s nice big house. He had even cut the grass. 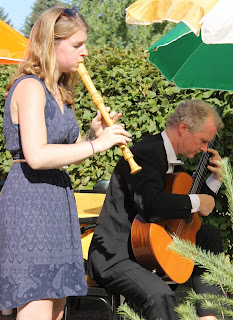 Then started the ‘Musical Summer Garden Party’. More guests arrived and neighbours settled into their gardens to enjoy the music. They even joined in the applause. I got as far as the first round of coffee and cakes before I had to leave to attend Party No.2. 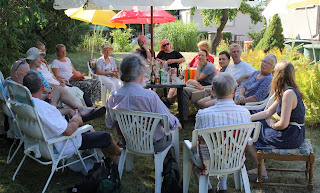 I got back to the S-Bahn and noted how empty the streets were. Half the population is on holiday and the other half was seeking the cool of a garden with trees. Yes, it was nearly 30°C again!

Again onto the bike until I reached the home of Herr Dr.M. and Frau Dr.I. Pardon. I have told you about them before and shared photos of relaxing in their very big garden. Traditional grilled food, salad, fruit and beer/wine were on the menu. Delicious.

I reflected on a day of simple pleasures, or just being with other people and enjoying time together. That is why I always like to spend summer days in Berlin – particularly with blue skies and such temperatures 🙂