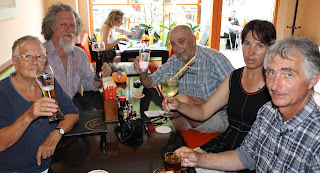 Spandau is a district in the north east of Berlin. Muscles recently moved there and I posted a report recently.  It was incorporated into Berlin in the early 1920s. From my local station I can get there on a regional train in less than 30 minutes. The S-Bahn takes much longer. 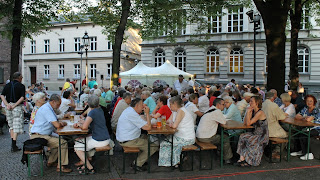 I went there last Monday with Johanna and members of her extended family/friends from Australia. Yes, Colin flew in last Friday with his cousin, wife and kids, and friend Jan. Another friend flew in this morning. We met up at Alexander Platz, without the kids, and took a regional train to Spandau.

Most were hungry so we ended up in a Vietnamese Restaurant. Here is a photo of us cooling down with a few beers. Yes, summer has finally arrived and we are enjoying nearly 30°C and it should last until the weekend.Nice,  more please :-))

We went there to show our visitors part of Berlin and enjoy an open air concert of mainly Klezmer music. Some of you may know that it is part of the Jewish musical tradition. It is traced back to the 15th century. It was secular music created by Ashkenazi Jews in eastern Europe. It is mainly dance music/songs typically in Yiddish, for weddings and other celebrations.

As you can see from the photo of the audience, most of them will not see 60+ again!! I have no idea why so many ‘oldies’ gathered to enjoy this musical event. Even so, there was a wonderful, happy atmosphere and our guests from Australia really enjoyed it.