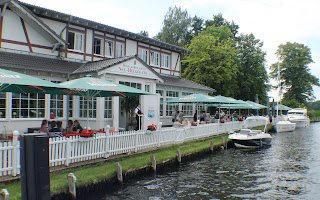 This means day-trip or excursion in English. I went on one last Thursday. I had been to the area before and so knew the route. The idea came from Oldie H., who I have mentioned more then a few times before. He was tired of staring at his four walls so asked myself and an Oldie Couple if we were interested in einem Ausflug. 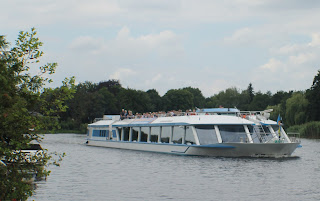 The weather was warm, with a light wind and clouds gently swimming across the sky. We all met at the end of a tram line near Oldie H’s flat. After greeting each other we set out slowly on our journey. It was all of across the road to a bus stop!

The Oldie Couple came with their walking sticks for they both have leg/hip problems. Even so, full marks to them for taking on a gentle walking tour. We got out of the bus at the final stop. This was south of a lake called Muggelsee. We slowly walked for 15 minutes until we got to our first destination. 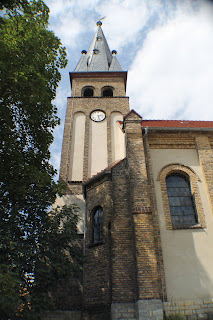 This was a nice large restaurant situated on a river/channel connecting the lake to a smaller one. We joined the mostly over 60s sitting outside at tables overlooking the water. Yes, you could not help but notice that young people were conspicuous by their absence! Well, someone has to do some work!!

We ordered traditional German dishes, which were as tasty as ever. I took a photo of a ferry passing by just to test the wide lens. It didn’t work on this shot. We slowly got to the ferry and travelled for all of 7 minutes to the other side and disembarked at Rahnsdorf. 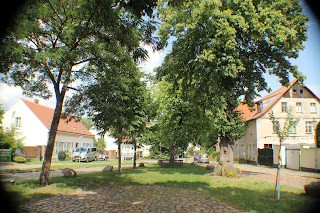 There is a record of this village in the 13th century made up of about 20 fishing families. It has grown since. Angelika’s mother and sister/family live in the village. I took some shots of the local church and restful village square. I always like going there.

We walked into the village centre and the Oldies decided to stop for ice cream. I don’t eat that so I settled for coffee and a slice of strawberry cake. Mmmm…very nice!  Another short walk and we arrived at the tram stop and then back to our respective homes.

A very nice way to spend a quiet, warm Berlin day. Try it the next time you are in Berlin.