I recently finished reading a book. It is called,”CHAVS:The demonization of the working class”. The writer is Owen Jones. I found it a very interesting read and it certainly brought me up to date on politics, economics and class divisions in the UK. I agree with Eric Hobsbawn who said it was, “Passionate and well documented”.  Buy it, read it and think about his argument. 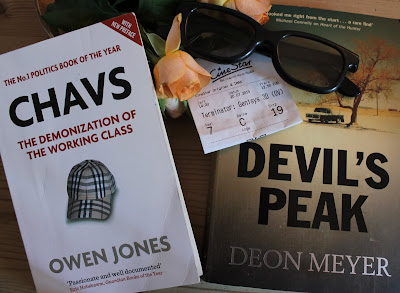 I’ve started reading another book but I can’t recommend it. It is Devil’s Peak by Deon Meyer and set in South Africa. In fact I am not sure I shall finish it. The paper re-cycling bin looks to be about the right place. Interesting characters and story — BUT —  why ooooooh whyyyyy do modern authors think they have to put a lot of swear words/bad language into the mouths of some characters?  Yes, re-cycling is the right place and now!

I went to the cinema this afternoon. Cine Star in Potsdamer Platz. They always show films in the original language. I saw, ‘Terminator: Genisys 3D’.  I wondered why ‘Arnie’ felt the need to be in/make such a film at his age. He certainly doesn’t need the money. I mentioned it to Kyrill last Saturday and he suggested I see it. He had.

The cinema hall was almost empty but it was 2:30pm with hot sunny weather outside. It was also in 3D. I was surprised at how good the film was! It developed themes in many of the earlier films and even made fun of Arnie’s character sometimes. It all worked and I shall not tell you any more about the story line. Drag yourself off to a cinema, put on your 3D glasses and judge for yourself!