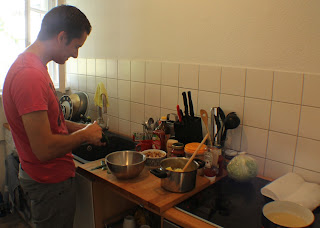 ‘Muscles’ Marcel moved to a new flat a couple of months ago. I decided it was high time to visit him so we agreed on yesterday. He lives at the opposite end of the city. I took a regional train then S-Bahn to get there. It took 90 minutes. He was waiting for me on the platform. I took the Airport Express back home and it only took 60 minutes in total.

When you travel in Berlin you think time and not distance. It was nice to see him again and he told me he is very happy there and can get to university in less than 30 minutes. He had planned a meal to which I added strawberry cake and some wine. It was also the first time I met his flatmate. 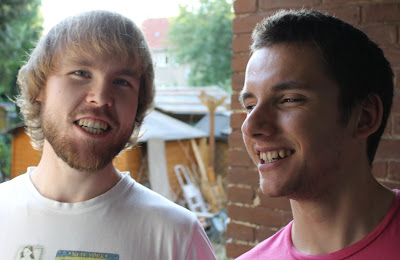 His name is Kyrill and he is studying computer sciences. He comes from St. Petersburg so we immediately got talking about the city and my visit there last August. Did you know that St. Petersburg has 5 million inhabitants and is the second largest city in Russia – after Moscow? And that it snowed there a couple of days ago? Now you do! 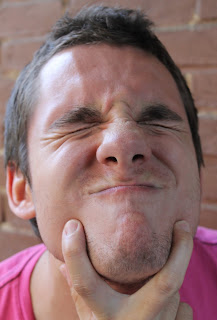 Kyrill has a warm and friendly personality and smiles/laughs easily. He speaks very good German and English. We started in the former then switched to the latter. Marcel continued to cook and join in the conversation from the kitchen. This included summer plans. As I write these words Kyrill is entering a plane to fly to St. Petersburg for a few weeks with his parents and friends. ‘Muscles’ will fly to Hungary in two weeks to spend a month with family and friends.

Before then, he has to pass the end of year exams in Maths and Physics. Not easy, but he is very disciplined and attends all classes and does the homework. He has four exams in the next two weeks and then it is time to pack a bag and enjoy life in Hungary.