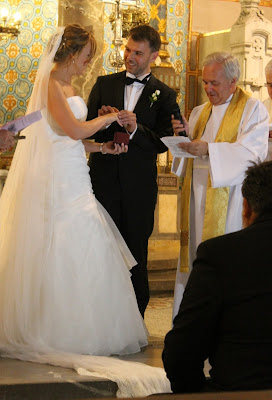 And so we filed into the church leaving the ever growing number of observers. I sat with Alan and Lynne near the front on the left of the aisle and took a number of photos as the ceremony unfolded. 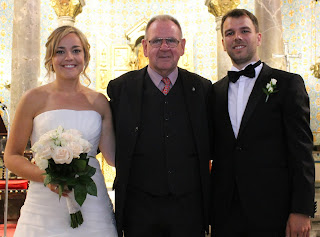 Jan and Arancha had organised the event starting with a quartet of musicians, who played classical music to my left, and a group of singers/musicians on my right who played more traditional songs.

We all got a printed order of the service in Spanish and German and three priests officiated at the event. The main priest seemed to really enjoy it all and I was later told he came to the reception, but wearing ‘civvies’ and not his business clothes!

It soon became clear to me that although we were in a catholic building we were not seeing a pure catholic ceremony. I noted the more ‘secular’ elements in the ceremony reflecting the protestant and atheist presence. I was not the only atheist there:-) I enjoyed the atmosphere in the building. 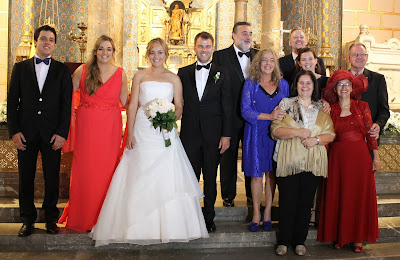 Cameras came out when Jan and Arancha moved forward for the exchange of rings, I include a photo of that here. Between different stages in the ceremony we heard the musicians play music by Handel and Bach and at the end the singers on my right played and sang more traditional local music. 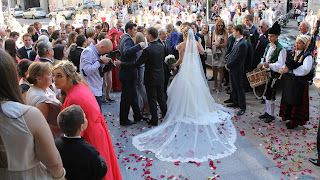 Then it was time to sign the wedding documents. Jan called me over to act as his witness and I slowly sat  down at the table and signed my name. A photograph was taken of the immediate family and witnesses and then the ceremony ended.

Jan left the church with Arancha on his arm to be greeted by drum and bagpipe as they entered the small area in front of the church.

Again, lots of passers-by stopped, smiled and joined in the cheering. Here is a photo taken from behind the couple so you can see all the well-wishers. Lots of snap, snap of cameras, hugs, kisses, smiles and laughter.

After some time most of us slowly walked around the corner to a coach to take us to the outskirts of the city to the wedding reception. My next post will be about that.