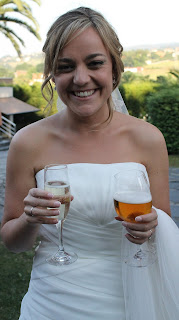 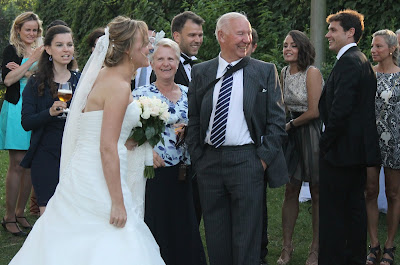 We stopped at a large restaurant on a hillside outside Oviedo. The first part of the reception was outside. Lots of waiters, snacks and trays of drinks moving around.

One of the waiters entertained us by pouring ‘cidre’ from a bottle raised above his head into a glass held as far away as possible. It is a popular drink produced in the area. The climate is not appropriate for wine making. That comes from areas to the south behind the mountains. 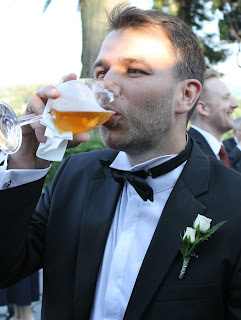 I couldn’t resist taking a shot of Arancha with her glass of champagne and Jan’s beer glass. The next one was of a happy looking Jan sipping his beer. Nothing new there and he certainly deserved it. 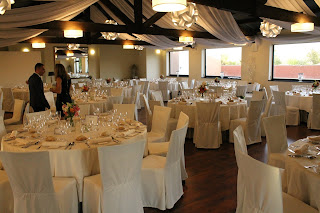 We also had time to wander around and chat to other guests and get to know new ones. I asked a young man with an interesting head of hair and chin beard, what his name was. He said,”Lenny” with a wonderful French accent which sounded like, “Lenneeeiiiiieeeee”. Great! We got into conversation and then met his very nice ladyfriend. We met next day when I again enjoyed his French-English sounds.

At 9.00pm we got the call to enter the building for the ‘eating’ part of the reception. We shuffled in. Each had been given a table number. I was allocated to Table 1 with Alan and Lynne. Next to me was Table Zero which hosted the bride and groom, and family members. 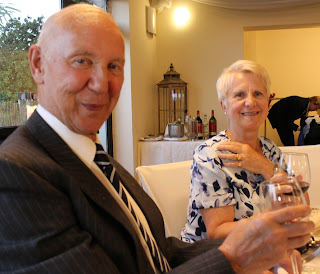 On offer was a meal of five dishes/levels. I decline dishes 1 and 2 because they were based on seafood which I have never eaten, and never will! This caused consternation to ‘Herr Ober’ who immediately asked if I could eat a piece of fish cooked with vegetables. I said,”Yes” and he dashed off to tell the chef.

The fish was tasty and went well with a glass of Spanish dry wine! I declined the next dish for it was a large piece of steak. It was certainly too late for me – and my stomach – to cope with such a dish after 10.00 pm. I enjoyed the dessert and coffee that followed. 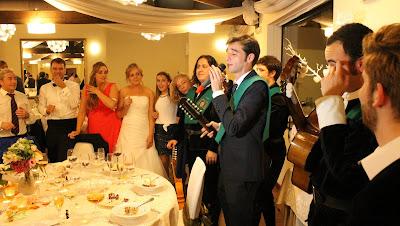 During the long eating session, there were speeches and entertainment by local musicians. The musicians were good and very professional.

Alan and Lynne and I began to ‘wilt’ as the clock moved towards midnight. He ordered a taxi and I jumped in. We were able to crawl into bed before 1.00 am. I went to sleep immediately. Meanwhile the party was hotting up! Tables cleared, musicians again and time to dance the night away. They did and it all finished about 4:00am. I was firmly in the land of nod by then!

Next day was another party at Arancha’s parents’ house. More about that in my next post.