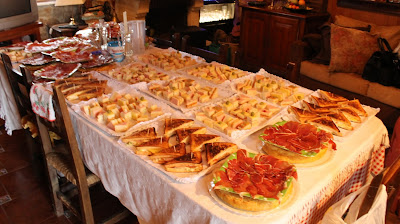 As I sipped my G&T and wandered around the garden, more guests arrived. Many looked rather tired from the late night/morning a few hours ago. Well, when you are 31 or younger you can handle all that. More was to come – unknown to me! 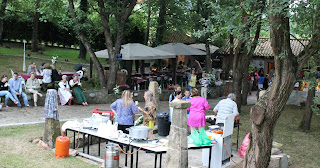 I sat with a group of Jan’s old school friends under the garden pavilion and read a book they had prepared with photos covering all their lives since they were small children. Most came from the same area and went to the same school. I enjoyed reading their comments and noted a few photos with me in the background. It was a present from all of them and they later gave it to Jan.

As the garden filled up I noted Arancha had arrived wearing football clothes. She plays in a women’s team where she lives. Now she was to captain one of the women’s teams. Off they went to the football area and so started the evening of sport, eating, drinking and much later of dancing the night/morning away. 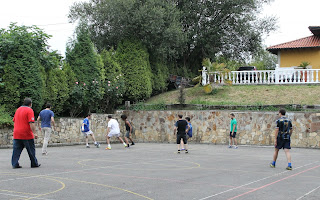 I continued to wander around meeting people and generally enjoying the views. On my return I noted a number of sausages waiting to be

consumed so I selected a well grilled one and added German mustard. It tasted delicious. I drank a glass of beer with it and then moved to the football pitch. 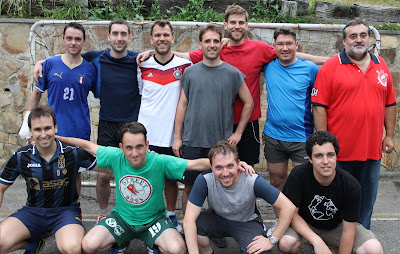 By then the ‘boys’ had taken over. Jan was organising a 5-aside match. He had to play in the Spanish team for one player was missing. After a couple of active and amusing games his side won! I noted how he played strategically just as he had done when he was 11 and I used to cheer him on at MSV matches. His style and approach to playing had not changed. Here is a photo of the two teams.

As evening turned into night Alan and Lynne told me they had ordered a taxi and if I wanted to come with them. I agreed and so we returned to the hotel as the younger guests started seriously eating, drinking and dancing. They finished at 8.00am when the rest of the area was waking up for breakfast! I discovered this next day.

How could they do it? I think I am just getting too old. It was yet another day I shall never forget :-))