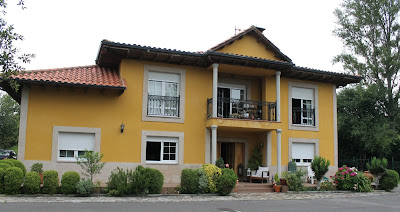 After a lazy and late breakfast in the hotel with Alan and Lynne we got ready to face Saturday in Oviedo. This was the day of another party but at Arancha’s parents’ house in a village to the east of the city. 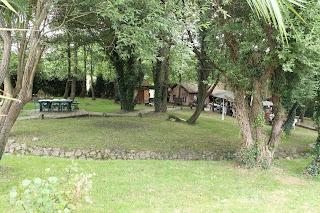 That didn’t start until 6.00pm so we had time to explore the city centre. Everything there seems to start in the evening. I knew from Jan that Spanish people start eating in the evening when the rest of Europe is thinking of going to bed. I had certainly experienced this the night before!

Alan, Lynne and I found a square in the centre and paid for a guide to take us around the centre and the Pilgrim’s Route. The Route goes back to the 11th Century when someone claimed they had found the bones of an apostle at a place in the extreme north-east of the Spanish coast. Not a bad way to start a new business! 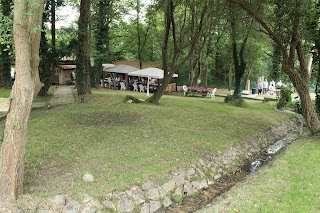 And so the gullible, and those who just like walking, created the ‘Pilgrim’s Route’. Part of it starts in Oviedo and is marked by bronze shells on the pavements which direct walkers. Our tour started with a young actor with good English who dressed like a medieval monk/pilgrim and took us around the start of the walk.

Later we met a lady tour guide who took us around the old centre, pointing out different museums and places of interest. We went into two museums and enjoyed the presentations. Early afternoon we had a light lunch and slowly walked back to our hotel for an afternoon siesta. 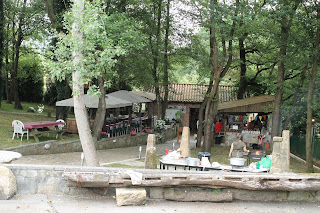 We met up at 5.30pm in casual dress for the party. Alan interpreted this as shorts and I decided it meant casual/formal based on black trousers, shirt and light coloured jacket. My concession was not to wear a tie. I later noticed I was ‘overdressed’ for the event!

We jumped into a taxi and found the house at the agreed time of 6.00pm. We were one of the first to arrive. I have just used the word house. I think the appropriate word would be villa. I decided to post this story using the German word das Schloss. That meant a castle many years ago and then translated into palace as we entered the
17th century. I prefer that description. 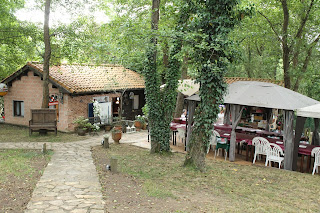 The door to the Schloss was open so we walked in to greet Belen, who is Arancha’s mother. The rooms were suitably furnished in good taste and I liked the welcoming atmosphere in their Palace! Belen asked us to help carry some food into the garden for the party. We all picked up things and followed her. 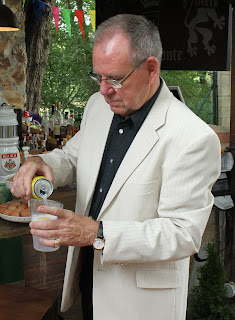 As we got to the ‘garden’ I said to Belen that it was nice to live opposite a public park. She just smiled at me and said it isn’t – it is our garden! Well, what do you think? Just look at the size of it. You can get half of Slisden into the garden!!

At the bottom of the garden you will see a small house, large bar and large sitting out area with a roof plus a special area for grilling.  On delivering the goods to the small house, I was offered a G&T which I insisted on making. Here is photo. As I sipped it, my eyes moved to another part of the garden and there I say a football pitch!

I could not believe my eyes. How many of you have a private football pitch in your garden? I have a nice garden but I don’t have a football pitch!  Here are some photos for you to enjoy.

The next story about football in the garden will be in my next post. Happy reading!