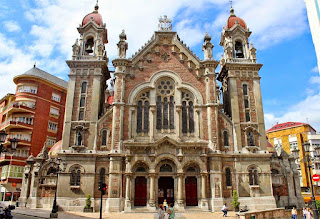 And lo it came to pass that Jan and Arancha married. Yes, that was why we were all gathered in Oviedo. It took me 11 hours from leaving my flat in Berlin to arriving at my hotel in Oviedo. Three hours were spent just waiting for my flight in Madrid airport. I passed the time by having a meal, buying duty free scotch and having lunch. 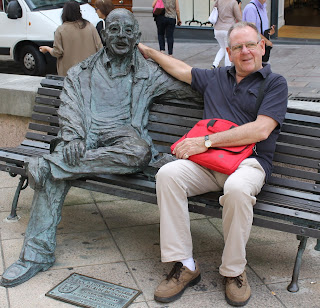 I took a bus from the airport to the bus station in Oviedo then a taxi to my hotel. It appears as the first photo in my last post. I entered the hotel reception and stared in amazement. Alan and Lynne were staring at me and smiling. What a wonderful surprise!!

We greeted each other warmly and with lots of conversation. I booked in, found my room and later met them for an evening of chat and a meal. I really felt at home and happy being with them. I never expected to enter the hotel and see them waiting for me with such big smiles. What a great way to arrive!

Next day was Friday and we had time before the wedding to explore the town. We wandered around the centre and found the church where the wedding was to take place. I posed with a statue on a bench at the entrance to the church. It was of a poet/writer from the area in the early 1900s. Having familiarised ourselves with the area we returned to our hotel to get ready for the ‘Big Event’.

So another shower was called for before putting on clothes acceptable for a wedding. I wore a three piece suit but insisted on a non-white shirt. To this I added a suitable mixed colour tie. So attired and carrying my camera I met Alan and Lynne again and set off for the church. 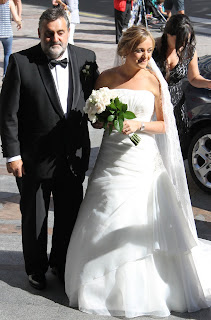 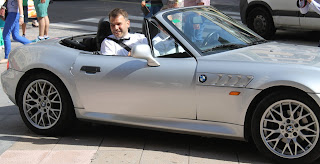 It was only 10 minutes away and we arrived a little early. This had the advantage that we could see all the other guests arrive and greet them. As more arrived more people passing by stopped to stare at the free show.

Jan arrived with a chauffeur in a BMW sports car, and with a big smile! Those present cheered and made other welcoming noises as he stepped out of the car and began to greet the guests gathered in front of the church.

And then Arancha arrived on the arm of her father. Lots of cheering and snapping of cameras. Jan moved forward to greet her to even louder cheers and smiles. What a wonderful time! Again lots of greetings to other family members and friends before Jan and the guests entered the church leaving Arancha to enter later with her father.

At this point I shall end my story and continue in my next post with the wedding ceremony.