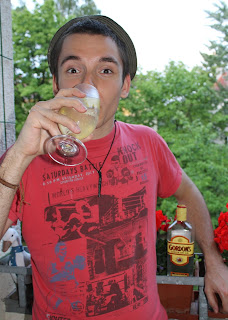 Mr. Muscles arrived last Saturday and it was nice to see him again. I decided to change Marcel’s name to Muscles. Why? He changed his part-time job from restaurant helper to Presentation Helper. I think I can hear you asking what that means!

It means he gets a call on a Friday or weekend to say where he has to go and what he has to do. His company constructs stages for all kinds of presentations/shows such as those for pop stars or for advertising companies. Now you know what it means.

It means physical work of lifting things and moving things. This requires using muscles in the upper body/arms. Marcel/Muscles started this work at the beginning of June. He now has larger/harder upper body muscles. 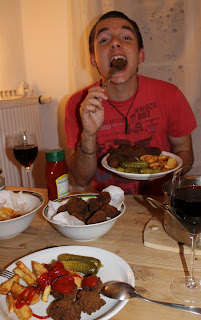 On arrival, the first thing he did was make two Gin and Tonics a la English style. Nice and cool and we sipped them on the balcony. Then he started to cook. During cooking we talked about his studies and I showed him a document I had just proof read. It was in English and about biology.

Actually it was about reproduction in yeast cells. The paper contained lots of abstract mathematical modelling. He scanned the paper and explained what it all meant. My jaw dropped in amazement that he could read and understand it all. A clear sign of his academic advance during the second year of his studies.

It was really nice to spend a full weekend with him for he worked locally and spent another day at my place. Again, lots of jokes and humour and all in English.

He said he enjoyed speaking English with me for he knows he needs it for his future. And now Mr. Muscles, get back to non-academic work and working on those muscles!