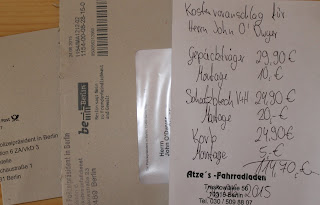 I confess I am still a paper person. I do not sit in public transport staring at a small phone in my hands. Nor do I walk along the pavement paying no attention to other people, but just staring into a phone. I think I represent a generation division.

I also read books. People have asked me why I don’t use a machine containing books/text. My answer is that I control machines and not the other way round. I also like the feel and smell of paper. 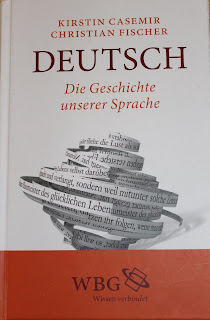 I was once asked if I tweet. My reply was that I was not a bird and, therefore, do not tweet but speak!

This week I got a letter from Berlin police. They could have sent me a computer message such as e-mail, tweet or whatever these things are now called. Instead I got words on paper. They wanted to know if I had got the number of the car which hit my bicycle last week. I posted about this.

They also wanted to know how much it would cost to repair my bike. I went to my local repair shop this afternoon and got a quote. The total cost would be €114,70cents!! Unbelievable! Almost as much as the bike cost!! So far, the witnesses have not called to give me the car driver’s number plate. Without it the police can’t do anything. And….I would have to pay the full cost of repairs!

Staying with the theme of paper: On Thursday I got a present from Christian Kind. He was the Mayor of Lichtenberg throughout the 1990’s and we meet each Thursday morning at the SPD Seniors Breakfast. His wife Gabi is ‘The Boss’ of this group and organizes we Oldies! He gave me a book about the history of the German language. What a nice surprise…… and it is all on paper!!