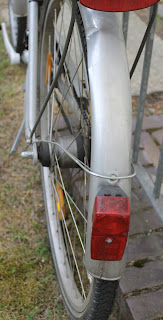 I registered ‘an incident’ with the police yesterday. The story starts on Tuesday about 12 noon when I parked my bicycle at a special bicycle park area in the car park of my local Lidl. I was in the store for no longer than 15 minutes. On returning to my bike I stared in disbelief.

Something had hit it and damaged the rear wheel, mudguard and metal shopping basket. As I was trying to understand what I was looking at, a man started talking to me. He worked on a building site in the car park and said he had seen what happened.

An elderly women backed her car into my bike, got out and looked at the damage, looked around, got back into the car and drove away. The man apologised for not taking the number. Another worker joined in and said he had seen it too. They agreed to be witnesses. We exchanged names and phone numbers. 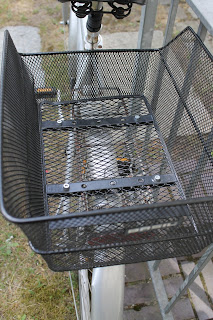 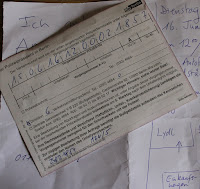 They also said they would be working at the entrance to the car park for the next two weeks so would look out for the driver and car should she return to the store, phone me and give me the car number. That was all on Tuesday. On Wednesday I went to Kerstin’s Oldie Keep-Fit gang and told them the story. Most of them said I should have gone to the police and I do it as soon as possible.

Off I went to the police station and registered the incident. A  nice lady police officer was very helpful and said I had done all the right things and that it is an offence in Germany to do such a thing and drive away. The next stage all depends on if the driver returns to the shop and the workers get her car number.

Here are a few photos of the bike, after I had wrenched bits of metal nearly into place, and of the police document. A new experience for me!