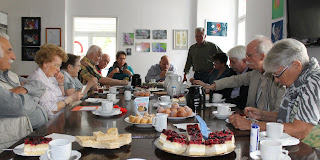 I had a political day yesterday. It started at 10.00 am with my German lesson, shopping then a meeting at 3.00 pm. This was my monthly SPD Senior meeting based on Coffee/Cakes and a guest. The cakes were very nice as you can see from the photo. I only ate the ones with lots of fruit and cream!

We had a guest. It was the Chairman of the Senior Representative Committee in the district where I live. I noted he also liked the fruit cakes with whipped cream! He gave a speech about what his group does in relation to the local council and other organisations. Very interesting to hear what goes on mainly behind closed doors and what is planned for the future. 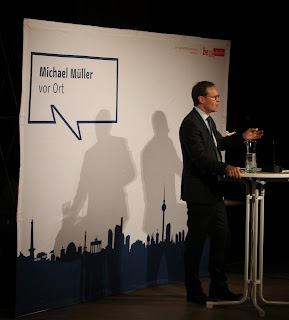 I then jumped into a car with a few other seniors and we headed off to my local Kulturhaus. We arrived in time to get seats in a packed hall. We were all there to question Berlins Regierender Bürgermeister (Lord Mayor) Michael Müller (SPD). Berlin has two legal entities. It is both the home of the Federal Parliament/Government and of the Parliament and Government of the Federal State of Berlin. 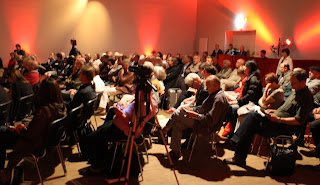 You Silsdeners may have a problem to understand that for it is totally different to what you have in the UK. In short he is The Boss in Berlin. On being elected to office by SPD members he decided to hold a series of regular meetings in each district making up the city/state of Berlin. He was well received although I noted that at least half of the public came from parties opposed to his.

Very interesting questions and he was able to answer without reading from  notes. When it came to local matters he asked representatives of the local council to answer specific points. I found the evening very educational and interesting. What a nice Poli-Tag (Political Day).

I was in a police station this afternoon, but more of that in my next post.