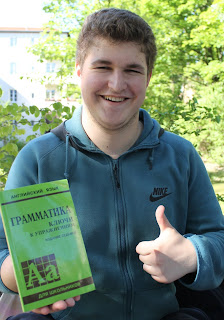 I had an interesting week which ended with a meeting in Alexander Platz with Maria and then with Daniel in my garden. It is now warm and sunny in Berlin. I have posted about Daniel before and he allowed me to post another report with photos.

I got to know him via Frau Fox, my German teacher. I do not see her much now but we keep in touch and I had a lesson with her last Wednesday. She regularly helps Daniel with German and he is a very active learner. He goes to a school in the north-west of Berlin in a district known for its social problems, and its poor language teaching. 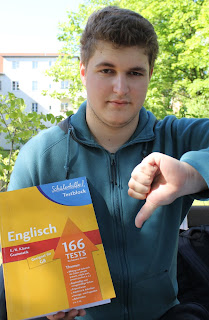 He has English lessons twice a week, but the class never speaks English. They just talk about English in German. His teacher should be ashamed of herself. In the future, other pupils have no chance in a job interview requiring use of English against pupils from other schools where they actually learn/use the language.

Since I decided to help Daniel the results of tests at school have gone from 5 to 2. Now he only speaks English with me when we meet. He is also very diligent and does all the homework I give him. English is his fifth language and he really likes his third language which is Russian. In tests he always gets a 1.

He recently ordered a book from Moscow about English grammar and written in Russian. Here he is with the book. He also posed with the book I am using with him for English. I am pushing him on tenses at the moment.  Nice poses, Daniel!