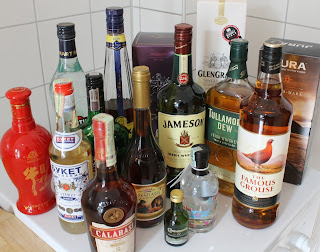 Nothing new happened this week. I did all the things I usually do and you know about. I did get two cards though. One was from Stefan and Melonie sent from Stellenbosch. Yes, the place in South Africa and famous for its wines. I hope they tried a few.

The second was from Barbara who went on holiday with Rachel to Cape(Cabo) Verde. In case you are wondering where it is, you can find a group of islands in the Atlantic off the west coast of Africa and one of them is the Island of Sal. That’s where they enjoyed a holiday. 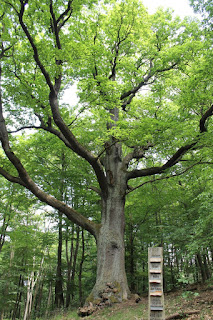 Barbara told me they were sampling cocktails and even sipping a glass of brandy – or two! Nice. Here is a shot of my supply. I took it when I was removing dust as part of a late spring cleaning attempt this week. So, which one would you like Barbara?

The other news is that my heart is ‘playing up’ again. It started on Friday morning during training with Kerstin’s Oldies. It continued throughout the rest of the day. I called my doc but he had already closed his surgery. I shall go there during the week sooner or later, depending on the intensity of the abnormal heart beats.

I close with a photo I took a week ago when I was on the Muggelsee Walk. It is of the oldest tree in the forest around the lake. It is 317 years old and an oak tree. There is a barrier to stop people getting too close to it. I couldn’t get far enough away for a shot of all the tree, but I think you have an idea of its dimensions from my photo.