My dogs were really barking yesterday. I think only the Silsdeners and other Brit readers will understand this phrase. It is an idiom originating in London and associated with Cockney slang. It means my feet hurt/are hurting/are painful. 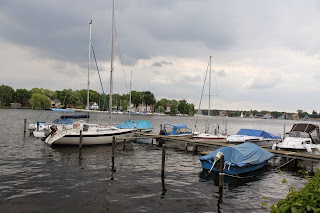 I can hear you asking why my feet hurt yesterday. The answer is that I did a 19 km hike/walk. No, not on a concrete track but through woods with gravel and stoney tracks. I got an e-mail on Friday to say that the walk was to take place.

It was in doubt for there was a rail drivers strike last week including drivers of the S-Bahn system in Berlin and you need that to get to S-B Grünau where the walk began. Most were Oldies and one arrived with two walking sticks – I was impressed. 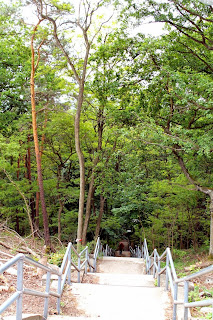 We walked to the River Dahme and took the ferry for all of 5 minutes to get to the other side where our track started to take us to Mügglesee, which is the largest lake in/around Berlin. We caught up on news for some of the Oldies I had not seen for a year. 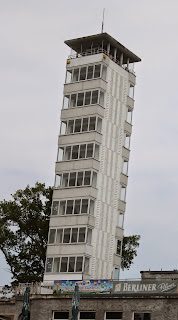 We managed to climb the too many steps to take you to the Müggleturm. This is a tower on a hill on the south side of the lake. The hill was formed X years ago in the last ice age. It is the only one for miles around. Here you can see the steps I climbed and the tower I didn’t. We had a relaxing break there.

Off again and we got to the south side of Müggelsee and walked east until we came to a small river which connects to the Klein (Small) Müggelsee. We galloped along and crossed over a large beach then further on until we reached our destination. This was a large restaurant/hotel. We sat outside and relaxed over a meal and drink.

I had a traditional dish called ‘Saurbraten’ with dumplings and red cabbage, washed down with a large beer from Saxony. Very tasty. Lots of interesting conversation before we took the ferry to Rahnsdorf, tram to Friedrichshagen and S-Bahn back into town.