I joined the ‘Fotoclub im Libezem’ at the end of last year. I think you will understand what Fotoclub means for it is close to the English words. Libezem is a neighbourhood meeting centre not far from where I live. They offer meeting facilities to many groups and interests as well as a tasty lunch for a relatively small price! 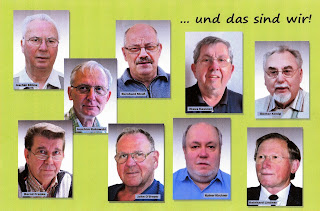 I was introduced to this group by Silke, my then ‘camera teacher’. She was a member of the women’s Fotoclub for some time. Yes, there are two clubs. One for males and one for females. When I asked why this was so, I was told it was because the men always go on about technical matters and the women want to talk about other things in a photo!  So, there are two Fotoclubs. 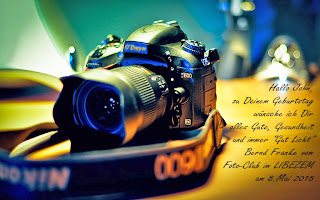 We are all over retirement age. I find it interesting to listen to the others talking about a photo projected onto a large screen via a laptop into which a ‘stick’ has been inserted. One reason is that many of them speak German with a ‘Saxon – Thüringa’ dialect and others use a strong ‘Berlinisch’ dialect. It is worth going there just to learn different dialects :-))

We have twelve photo image/topics per year and so are expected to present photos we have made showing these topics. For example: Photos showing reflection or taken into the light. They discuss each one including technical comments and then change the photo via more or less contrast and/or colour. I’m the new boy and so listen to the comments of others. They are happy to comment on mine and offer advice.

The boss is Günter and the secretary is Bernd. Bernd sent me a very nice greeting for my birthday and added a photo of a camera to which he had changed its name to mine! Very nice 🙂