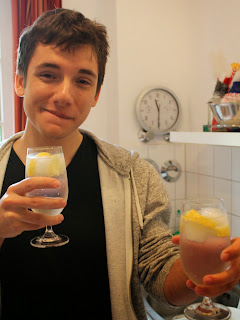 Marcel learns very quickly. He had never heard of Gin & Tonic before he came to Berlin to study. I introduced him to the summer drink ritual. He discovered he liked it! I told him about the history of the drink and its social connections to middle class/military/officers mess/summer/lawns/relaxing on the balcony England. 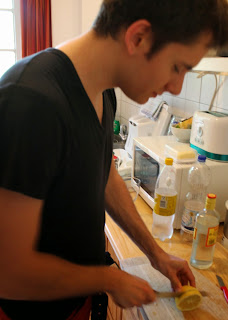 We had arranged to meet yesterday. He arrived late and very tired. He had worked on Saturday evening and only got into bed at 4.00am on Sunday = yesterday. During our call he asked if we could have a G&T when he visited. “Of course,” was my reply. We meet to celebrate our birthdays. He was 21 on the 6th May and I promised to take him to a restaurant of his choice as a birthday present. 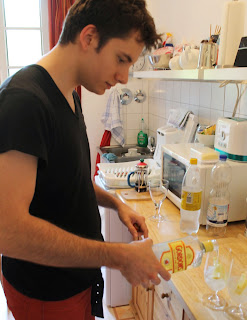 Just as he rang the doorbell, I was about to jump under the shower. I let him in and told him to make himself at home for he knows where everything is. I showered and duly emerged clean and scrubbed before dressing for the day.

I then entered the kitchen. Marcel had closed the door and I thought nothing of this. As I opened the door I realized why. He had made two G&Ts while I showered and waited for me to emerge. What a shock! Look at this photo of him offering me a G&T! And look at the time!! We sipped and talked about his birthday. He told me the following. 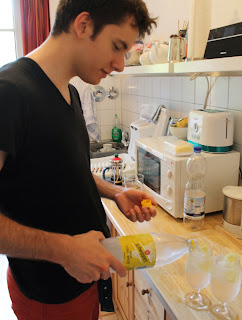 His mother took a train from Hungary and his sister took a plane from England unknown to Marcel. They met in Berlin and went to his university. They found the room where he was having a lecture and walked in as it ended. Marcel was more than surprised to see them. I can well understand that. To take on such a journey for only a day together must say something about how much they value and love him. Wow – amazing!

Marcel chose a local Italian restaurant we had not been to. I had and knew it survived by offering good food and service. We had an excellent  meal with lots of interesting conversation. I met some ex-neighbors I had not seen for a number of years, and then we returned home. Marcel was by then very tired and so he crawled into my bed and dozed off. I hit the internet and caught up on news. 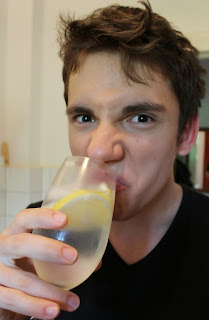 He emerged to suggest we have another ‘birthday G&T’. I took these pics of him preparing them. He has learnt/learned to make an excellent G&T hence the title of this post, ‘Gin King’. He sprawled out on my sofa as he sipped his glass and the conversation turned to his studies and uni routine. As this developed we talked about the philosopher David Hume.

Yes, G&T with David Hume can be a very interesting mix! I had to explain Hume’s ideas but it was interesting how quickly Marcel picked up on key ideas and asked question so taking the discussion further. We did not have another G&T for it was time for him to return home. That is a new flat in Spandau which he shares with a Russian student.

I look forward to meeting him when I visit at the end of this month. I walked with Marcel to the tram stop and so started a one hour journey home for him and ended a very pleasant and memorable joint birthday celebration. Happy memories!