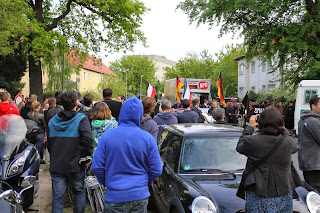 As I chatted to the nice police officer in English, he slowly escorted me to the counter demonstration lines where the SPD members and others were hurling insults at the NPD. I won’t repeat them here! There were a lot more of them and they were louder. Many had come with whistles and other things to make a lot of noise and so drown out the NPD. 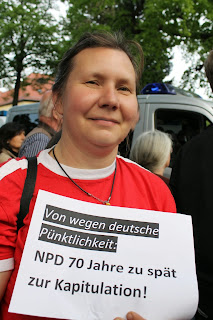 I was interested to see the kinds of people who had come. Some were locals who were attracted by the noise, other had stumbled on the event while taking the dog out for a walk, and others were just interested in the outcome, such as would there be a fight between the two groups. There wasn’t!

The counter demonstrators were content to drown out the NPD and not stop them from having the right to speak in public. The police acted with understanding of the situation and were polite while being firm in dividing the two groups. 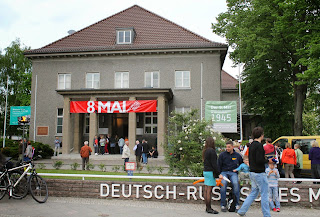 I moved around the counter group and found Silke holding up a poster. Really nice to see her again. If you remember she was my ‘camera teacher’. We talked about lighting and adjusting the cameras and I learnt more from her about that. 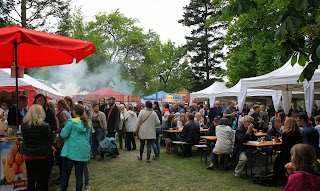 Later we moved to the museum where we met a lot of interesting people, some of whom were my ex-students, so we had a lot to catch up on. Of course, the area around the museum was dominated by booths selling food and drinks.

There were also lots of Russian and Ukrainian Germans there. It was nice to see how people of different nationalities/languages just enjoyed being there and simply talk to each other and share jokes. A fitting end to an interesting birthday.