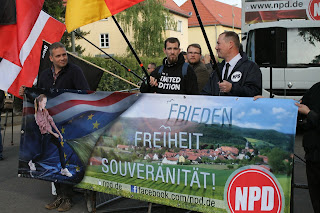 Yesterday evening I cycled to the other side of Karlshorst to arrive at the now Museum which was then an officers mess as part of an officers training college/area. The document ending WWII was signed there when I was two years old, and probably filling my nappy! It was signed in the evening so by then it was the 9th May in Moscow hence they celebrate a day later. 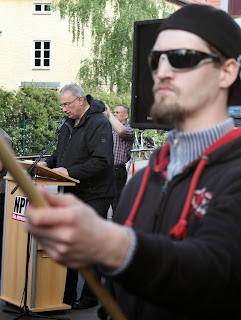 I arrived to find the police had separated the NPD and the counter demonstrators. I moved close to the NPD line in time to take a few photos, including one of the main speaker. I could not believe what he was saying about German history in the 1930s. What he was saying was the opposite of what witnesses and news reports tell us today! Are they really so deluded in the head?

A police officer came to me and very politely asked if I would move away from the NPD line. He said it was for my own security. I said I had no problem to move and then he switched into English. We had a little chat and he said it was nice to practice his English with a native speaker. The NPD behind us was forgotten for a few minutes.

I found a lot of SPD members in the counter demonstration and members of die Linke Partei along with members of the public who wanted to protest against the NPD demonstration. The whistled and booooood as the NPD speaker tried to get his message across. 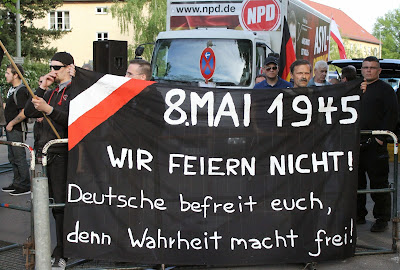 I decided to post pics of the NPD members and a translation of the main poster they had. You can read “Wir feiern nicht!” = We don’t celebrate/We are not celebrating. German does not have any continuous tenses 🙁  “Deutsche befreit euch” = Germans, free/liberate yourself – denn Wahrheit macht frei! = because (the) truth makes (you) free.

The last phrase must have been deliberately written to provoke people, or draw attention to themselves. If you remember, the sign at the entrance to concentration camp Auschwitz reads, ” Arbeit macht frei” = Work makes (you) free!  This is clearly a word play for German speakers .. and a very sick one!!