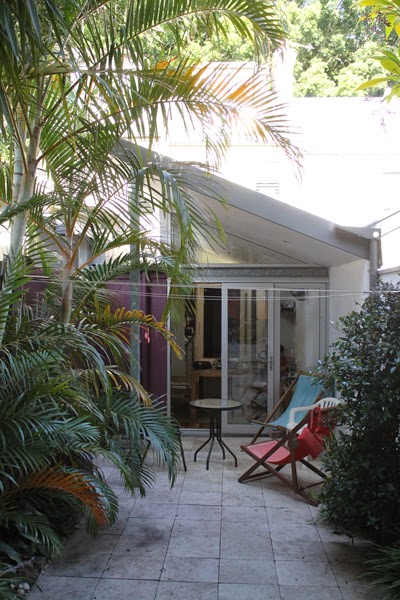 Some of you asked me where I am staying. Thanks for that. As you certainly know I am staying with Ian and Birgit at their house in Paddington. This is a district/suburb to the east of the centre. I am told it is a ‘desirable’ part of town. The area is linked to the centre via Oxford Street which takes you all the way to Bondi Beach to the east.

It is made up of ‘two-up-two-down’ terrace houses ‘a la Brit style’ of the late 19th century to which were added patios, garden extensions and balconies. 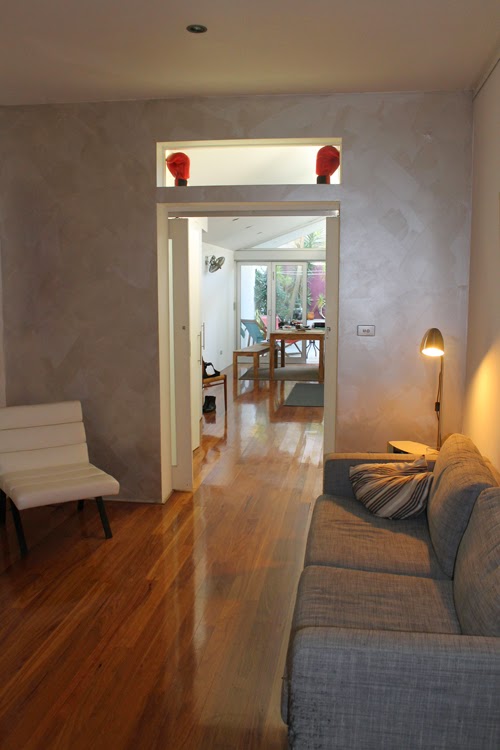 Here is a photo of the house from the garden. The other is from the living room into the guest bathroom on the left,  laundry room on the right, kitchen in the middle leading into the dining room and beyond it is the garden. Hope you can see all okay. The house has an upper floor with the main bedroom and bathroom. Above that is the guest bedroom with a small balcony. That is my room! There is also a study not in the photo but on the left when you enter the house.

Paddington has lots of little shops, cafes, restaurants and many book shops for it has a campus of NSW university. It is very hilly, has an army barracks two minutes away and a large public garden all of five minutes away by bus.

Oxford Street is the link to all other parts of town and provides the main form of public transport, which is the single decker bus. There are no trams, but there are lots of taxis and a comprehensive local train service, but not like the Underground in London or U-Bahn in Berlin. It is more like the Regional and S-Bahn in Berlin.

Tomorrow morning I am going on a tour of the barracks which are two streets from where I live. I then plan to go to the centre and see some old buildings including Sydney/NSW Parliament which is near to the Botanical Gardens and Hyde Park. Yes, there is another one here!